Cabinet to discuss US proposals on U-tapao

Opposition claims push for relief base, Nasa project tied to visa for Thaksin

The Cabinet will today consider US proposals to use U-tapao airbase for weather research, plus disaster relief and humanitarian assistance, Foreign Minister Surapong Towichukchaikul said yesterday.
He has dismissed claims by the opposition that the projects are part of a deal in exchange for a visa to allow former prime minister Thaksin Shinawatra to enter the United States.
Prime Minister Yingluck Shinawatra discussed the matter yesterday at a hotel in Pattaya with Deputy Prime Minister Yuthasak Sasiprapha, Defence Minister Sukampol Suwannathat, Surapong and heads of the Army, Navy and Air Force.
There were two separate proposals to use U-tapao. One was from the US National Aeronautics
and Space Administration (Nasa), which wants to use the Chon Buri airstrip for climate-research aircraft. The other is an idea to use facilities at the airbase for humanitarian assistance and as a disaster-relief training and readiness centre.
The two matters are now mixed up in “security concerns” that the US may like to use U-tapao, which saw a lot of action during the Vietnam War, as a base to contain China in the Asia-Pacific region.
The Democrat Party and some senators say the government must submit the proposal to Parliament in accordance with Article 190 of the Constitution. Use of U-tapao may have implications in regard to Thai sovereignty, they said.
No Thaksin link: Surapong
Local media have put some domestic political flavour into reports on the matter, saying the government might exchange the right to use U-tapao for a visa so Thaksin can visit the US. But Surapong said Thaksin had no link to these matters.
“The allegation is totally groundless. I believe that former prime minister Thaksin would never exchange personal interest with national interest.”
Sukampol said he agreed with the Foreign Ministry that the Nasa proposal was purely about scientific research without any tie to security concerns.
“Don’t worry, I take care of security matters. I will never allow anything to affect our security. Nasa’s project is similar to one that has already been conducted in many countries,” he said.
Asked whether the Nasa aircraft and its satellites would spy on Thailand, Sukampol said every location in the country could be seen via Google Earth. There was no need for the US to do that.
Nasa’s request
Surapong said Nasa asked in March if its three weather-research aircraft could use U-tapao for two months – August and September. The Science, Technology and Environ-ment Ministry’s Geo-Informatics and Space Technology Development Agency would work closely with them, he said.
Nasa is not a military agency and its proposal has no connection with military operations, he said.
China has no doubts about the proposal, as a similar project was conducted in Hong Kong recently, Surapong said. But Cabinet may discuss the Nasa project in its meeting today and he will brief other ministers about the other proposal to use the Chon Buri airbase as a humanitarian-assistance and disaster-relief centre.
Surapong has just returned from the fourth Thai-US Strategic Dialogue in Washington, and it agreed to set up a working group to develop the aid and relief centre jointly at U-tapao. But this was simply an idea and many countries could join the project, he said.
“We might invite China, Australia and many countries that have advanced technology for humanitarian assistance and disaster relief to join the scheme,” he said.
Navy Commander Admiral Surasak Runroengrom said both proposals on weather research and humanitarian assistance would be really useful for Thailand.
“We have already consulted with China and other neighbouring countries on the projects and no country had any objection,” he said.
However, Senators Pichet Sountharapipit and Somchai Sawaengkan and Democrat MP Thaworn Senneam said any move by Cabinet to allow the US to use U-tapao without permission from Parliament might go against the Constitution.
Ombudsman Sriracha Charoenpanich also said the government needed to discuss the issue in Parliament, as per Article 190 of the Constitution.

TAP.  This is chemtrailing arrives in S.E.Asia time.  The disaster relief ties in neatly with the Rockefeller ‘plan’ for disaster to strike in Indonesia in 2012, shortly after the 13,000 deaths at the London Olympics. 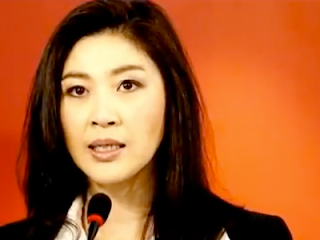 Shinawatra, the current PM, is ‘associated’ with ex-PM Thaksin, currently exiled in Dubai.  MOney buys a lot in Thailand – like for example, the country.  Thais proudly claim they have never been invaded by a foreign power.  The Japanese were ‘influential’ in WW2, it might be said.  Now the Americans are able to take over and do whatever they please.  The Land Of The Free (Thailand) looks like a thing of the past.