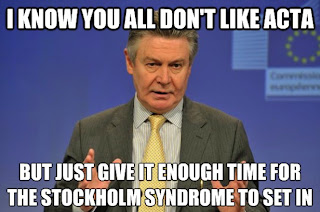 ACTA is almost dead. The treaty is heading towards the European Parliament next week where many people feel that it will be rejected after four committees rejected it as well. It will also receive a ruling from the European Court of Justice to see if ACTA was ever compatible with European law. It’s looking bad for the treaty that everybody hates, but one man won’t let it die.
Techdirt has stumbled across some troubling news that EU Commissioner, Karel De Gucht, will not let ACTA die. This isn’t one of those veiled threats either. He is deadset on making sure ACTA becomes law and he will ignore any ruling from any party to get what he, and the multinational interests backing the bill, want.
In a speech before parliament last week, De Gucht outlined his vision to get ACTA ratified. He’s still obviously trying to get the parliamentary vote, but that’s looking less likely every day. If it voted down, he will still keep on its case until a hearing comes from the European Court of Justice. Surely if the court strikes it down, he’ll just give up, right?
Unfortunately, De Gucht’s only quality is his persistence. He says that he’ll push for “clarifications” to the treaty to maybe sway more members of parliament and the public to his way of thinking. These “clarifications” will not change the bill in any meaningful way. It’s more like a sheep in wolves clothing tactic of trying to explain away some of the more damaging provisions in the treaty as harmless.
After our dear De Gucht has had time to  convert more members of parliament over to his side, he will put ACTA before parliament again. He’s pushing this treaty like members of Congress push Internet bills in this country – keep pushing the same thing until it sticks.
It’s important to note that De Gucht will have to wait a while if ACTA is defeated by both parliament and the European Court of Justice. A defeat here would allow the anti-ACTA forces to retaliate and push for even stronger protections against treaties like ACTA. Hopefully European citizens actually care about the Internet and keep on the offensive after only one victory unlike our own country’s utter apathy towards CISPA after getting all hot and bothered over SOPA/PIPA.
The European Parliament is expected to make a decision on ACTA in the first week of July. We’ll keep you updated on any news. Just like the Euro Crisis, ACTA affects far more people than those in Europe. It will have massive ramifications on those of us in the U.S. since our own representatives decided to sign the treaty without asking permission from Congress first.
The Tap Blog is a collective of like-minded researchers and writers who’ve joined forces to distribute information and voice opinions avoided by the world’s media.