Hi Tap, here is the Knights of Malta Stuff. 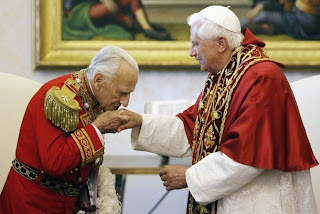 IT SHOWS THEY ARE ALL WELL QUALIFIED GANGSTERS!

FOR THE COMMITTE of ROME

APPLY OCCAM’S RAZOR, & in My View THE JESUITS ARE STREETS AHEAD, but a prerequisite for a Jesuit is that of  accepting Zionism. Catholicism is the first step, & can be considered as the Mother Church, those who wish to proceed to HIGHER OFFICE whether ‘Pseudo Jew’ or Gentile become Jesuits, this overrides any former Loyalties, it is unlikely that as with Masonary the members of The Mother Lodge have any Idea of what is going on at higher levels.

So all regardless of what you Label them as work for the Implementation of World Jesuit Control, via The Papal Knights, of which there are many Orders. The Order of St. Gregory is the highest, it just so happens that all are Puppets of The Vatican, but Papal Jews are favored as PUPPETS. All  regardless of what their former labels were, should now only be considered as Jesuits controlled by The Black Pope, The White Pope is seen to be in control but the String are Pulled by The Black Pope.
There is a possibility that a Higher ET LEVEL PULLS HIS STRINGS, as you cannot dismiss this possibility, when considering THE CHURCH OF SATAN.

The Initial Membership List is posted below, but first read a few Facts about the Knights of Malta & some of the ways they are impacting the United States — yesterday, today…and forever??? Also notice the BIG NAMES of the Court JEWS for the VATICAN who Kiss the Papal Ring…
Knights of Malta Facts:
The Knights of Malta are the Militia of the Pope and are sworn to total obedience by a blood oath which is taken extremely seriously and to the death. The Pope as the head of the Vatican is also the head of a foreign national power.
As a member of the Knights of Malta and by virtue of your blood oath of obedience to the Pope, you are required to support to the death the desires of the head of the Order of the Knights of Malta — in this case, Pope Benedict XVI — over and above any other allegiance you may feel or pretend to feel toward any other loyalty — such as a loyalty to the Constitution for the United States of America.
Those who are presently members of the Knights of Malta must on penalty of death support those policies advocated by the Vatican. It is not hard for them to do this. They BELIEVE in these policies and principles. The policies which are espoused and proclaimed by the office of the Pope are as follows:
1. End of sovereignty for the United States and other countries.
2. End of absolute property rights.
3. End of all gun rights.
4. The New International Economic Order (world government).
5. The redistribution of wealth and jobs.
6. Calls for nations to trust the United Nations.
7. Total disarmament.
8. Promote the United Nations as the hope for peace.
9. Promote UNESCO, the deadly educational and cultural arm of the United Nations.
10. Promote interdependence.
11. Support sanctions honoring Father Pierre Teilhard de Chardin — the New Age Humanist Priest.
12. Support the belief that the economic principle of traditional Christian or Catholic social doctrine is the economic principle of communism.
13. Promote the Pope as the acting go-between for the United States and the Soviet Union.
SO…WHO REALLY CONTROLS THE UNITED STATES OF AMERICA?
Most Current Obedient Puppets in High Places…
ZIBIGNEW BRZEZINSKI
Member: Knights of Malta
Member: Bilderberg Group
Member: Council On Foreign Relations
Member: Trilaterial Commission
Advisor: Jesuit Georgetown University
Polish Roman Catholic Socialist-Communist
Professor: Columbia University, New York
Recruiter of Barry Soetoro, 1981
Creator of “Barack Hussein Obama”
GEORGE SOROS
Member: Council on Foreign Relations
Member: Carlyle Group
Multi-billionaire
Major Stockholder: Halliburton
Hungarian Jew: Socialist-Communist
Financial Backer of Barack Hussein Obama
Friend of Rupert Murdoch
Freemasonic Jewish Labor Zionist
“Court Jew for the Pope”
JOSEPH R. BIDEN (Vice-President of the United States)
Papal Knight; Jesuit Temporal Coadjutor
Vice President: Rome’s “Holy Roman”
14th Amendment American Empire
Alter Ego: Jesuit Advisor to
President Barry Davis Obama
Promoter: Council on Foreign Relations
Honorary Degrees:
Jesuit University of Scranton, Scranton, PA
Jesuit St. Joseph’s University, Philadelphia, PA
BARRY DAVIS (Sitting President of the United States)
“Barack Hussein Obama”
32nd Degree Prince Hall Freemason
President of Rome’s “Holy Roman,”
14th Amendment American Empire
Sunni Moslem, Pretended Protestant Christian
Father: Frank Marshall Davis, Jr.
Wife: Michelle, Member: Chicago CFR
Obama: CFR-Controlled and CFR Spokesperson
Obama: Promoted by the late William F. Buckley, Jr.
Buckley: Knight of Malta, Bonesman, Bilderberger, CFR Member
Buckley: Promoter of Reverse Discrimination against Whites
Buckley: Promoter of a Coming Black President
Obama: Trained in Romanism, Islam and Apostate Protestantism
Obama: “Nimrod”; Pretended Unifier of Whites and Blacks
Obama: Promoter of the Papal Crusade against Shia Islam
Obama: Promoter of Bush’s Papal Inquisition
Against Protestant American Liberties
Obama: Jesuit Temporal Coadjutor
Promotor of the Black Pope’s Counter-Reformation
Barry Davis: “Boy” of Pope Benedict XVI
LINKS to Articles:
Knights of Malta ~ Initial Membership List
http://www.biblebelievers.org.au/kmlst1.htm
There are some very Interesting name Listed Here
Project Avalon ~ Knight of Malta anyone?
http://www.projectavalon.net/forum/showthread.php?t=4872
LoneStar
More PAPAL KNIGHT PUPPETS not Listed
And Here is One we all hate
Knight of Malta Jose Barroso (President of the European Commission) Included, to show his Knights Cross
REGARDS ………..  WASP
The Tap Blog is a collective of like-minded researchers and writers who’ve joined forces to distribute information and voice opinions avoided by the world’s media.