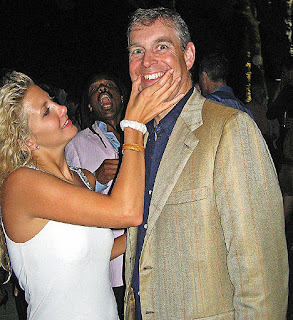 TAP – One problem for elites is that they tend to inbreed within very tight circles, attracted by all the money and power.  As a result the quality of their genes goes into decline, and you get very average quality individuals carrying enormous inherited power.  As an antidote to their mediocrity, they become fascinated with eugenics – the science of genetic manipulation, which is a posh word for killing off the less desirable traits, and breeding to capture the good.  That was how it was seen in the old days, at least.  The theory and the practice have been very different, however. Many millions of intelligent and competent individuals have been killed by various regimes across the world, in an attempt to crush potential competition.  If you can’t breed well, yet you are powerful, you can at least smash up the opposition. None, though, has, as yet been successful at creating the more prefect human being.

Pictured above – Prince Andrew.  His parents are both Great Grandchildren of Queen Victoria.

Now they are trying another way.  Unable to breed successfully, and with their IQ levels dropping all the while, dependent on the use of brutality and terrorism to maintain their position, the elites are now turning to Genetic Modification in their desperation to try to stay ahead of the rest of humanity.  I mean.  Look at George W. Bush as a classic example of the kind of mediocrity, to which I am referring, or Prince Charles or Andrew.  The Bushes and the ‘Windsors’ are cousins by the way.  Everyone has to pretend these people are not total jerks out of politeness sake, but you see what I mean.  Bush came out of Yale thinking he was some kind of genius, too dumb to realize he owed it all to Daddy’s money.
Well never fear.  Daddy’s money can now buy genetic modification.  The dumbos up top will soon be equipped with features from the science laboratory to compensate for their deteriorating inbred genes.  Frankenstein Foods will be giving way to Frankenstein ‘leaders’.

Scotty writes –
http://www.youtube.com/watch?v=RQDD4mQE7Tc
In this lecture, Tom Horn talks about his book PANDEMONIUM’S ENGINE.
Transhumanism is the re-engineering of human beings.  Human 2.0
Research is being carried out by around the world.  What has happened with GMO crops and GMO animals (Tom Horn claims that farms in Missouri, USA are now raising GMO pigs with human organs)  – will very soon happen with human beings.
The US government has been giving taxpayers money to academics to draw up ‘guidelines’ for, and investigate the possible legal status of future GMO humans.
Case Law School in Ohio receives $770,000 taxpayers money, from NIH (National Institute of Health) to plan a new legal framework for the GMO-humans of the future.
Is this the ‘evolution’ that the occultists write about?   Human 2.0?  What about the rest of us, those ‘not eligible’ for transition / ‘evolution’?
This notion of the coming human ‘evolution’ is being pushed in the corporate media.  Is this what Icke and David Wilcock are talking about?  Note also Lady Gaga’s very weird occult image and philosophy .
Horn also covers looks at a document entitled “Global Governance 2025 : At a Critical Juncture” published by the US office of the director of national intelligence working with the EU institute of security studies Sep 2010 NIC report. Excerpt from page 35: ‘What are the triggers that could set in motion the sudden need for global government?’
So, what does the future hold?  I sometimes wish that I was one of those people who find it easier to pretend that none of this is real…
Below is the written introduction to the lecture, copied from YT.


In every generation, when dangers gather, there is a group of men and women courageous enough to confront evil and inform the populace.


Sometimes unpleasant truths need to be presented; most of us would rather stand back and kick a toe in the dirt. You know, let someone else do it.

Someone else is courageous enough to tell us the truth. Tom Horn & Friends research, publish, and speak about some of the most important topics of our time. Pandemonium’s Engine is a presentation AND A NEW BOOK (www.SurvivorMall.com) — the vehicles through which Tom and an elite team of commentators are informing a still-sleeping public about radical changes coming to our culture…very soon.

In particular, the technological advances that have brought us to the doorstep of life-altering realities are such that the man-on-the-street is struggling to make sense of our world.

The book PANDEMONIUM’S ENGINE is a landmark offering, making such issues as “transhumanism” compelling reading. A shadowy world of intrigue, power-grabs, and seismic changes in daily life is the stuff of sci-fi movies. Yet the authors contributing to Pandemonium’s Engine show us in disturbing detail that these mind-blowing technologies are quite real.

“Transhumanism is a transnational technocratic trend that promises to break through human biological limitations by radically redesigning humanity.”

Sound like a campy Star Trek episode, or a movie plot from Stanley Kubrick?

As a matter of fact, they are, but rooted in present reality. Change agents in our world are working feverishly to harness the powers of human ingenuity, to wreak havoc on our way of life.

Chuck Missler writes in “Pandora’s Box for the 21st Century? The Sorcerer’s Apprentice” that the seductiveness of medical advances mask a diabolical agenda. For example, he mentions that the drive to, among other things, develop receptors that could impinge the constriction of blood vessels and thus the scourge of hypertension is a source of optimism. As are drugs that inhibit damage from brain trauma, or genetic research that could cure diabetes.

But Chuck knows that some researchers would trample over ethical boundaries and move past such positive research into frontiers humans were not meant to go.

Frederick Meekins’ chapter, “Examples of Transhumanism in Popular Culture” identifies how we have been brought along to accept technologies. We’ve been conditioned, by popular television series like Star Trek, and films like Spiderman, to subtly be prepared for radical, sweeping tampering with the human mind and body.

John McTernan writes about “embodied intelligence” robots, biocomputers, and other space-age technologies many of us have made the mistake of believing lie in the realm of fiction.

Providing perspective is Noah Hutchings, who traces advances in technology from the time of another Noah, to the present time.

All these authors, and several more, provide a searing report on just how ambitious the builders of the New Babel really are. Pandemonium’s Engine will stun you.

That’s good. You need to wake up. History shows that those who make reasonable preparations are much better equipped to deal with colossal changes than those who prefer to fully trust their handlers.

I well remember the days when my uncle was on the ground floor of computer technology, tinkering with those machines the size of refrigerators. I remember reading George Orwell’s 1984 and laughing that such a far-in-the-future could actually arrive.

We are well past 1984, figuratively and literally. Pandemonium’s Engine will show you just how far past.
Read and prepare.

One Response to “Welcome To GMO Humans.”