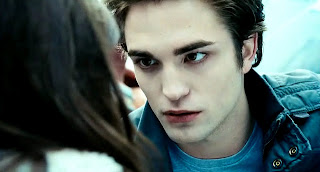 I’m struck by the current amount of vampire promotion in the media and am curious as to what Hollywood’s potential motive could be.


It’s been suggested to me that it is to condition the masses that a power exists that is beyond their control, essentially subliminally suggesting resistance is futile…sound familiar? Any suggestions from you or the tap community would be greatly appreciated. Cheers!

I think it’s about the promotion of the occult and witchcraft, making it attractive and normal. Look at how the Harry Potter films and books have done the same. Male and female roles are also exemplified for us, i.e. this is how you are expected to behave, this value system and the attitudes of the characters is the norm.

Another good example is Friends, think how powerful that was in shaping the value system and the attitudes of young viewers. Maybe the best example is Sex in the City – promotion of extreme female emancipation, women behaving just like the worst examples of men, sexism in reverse and being celebrated, laddettes, women rejecting family, putting their careers first – the message is that’s all you need to be happy, girls – babies are for chavs and a wife is nothing more then a slave. Women are completely taken in, of course – until they hit mid-30’s and realise they hate their jobs and regret not marrying and having a family when they had the chance.


TAP –  Is that true, girls?  And not to mention the veritable rash of alienmovies spilling out of Hollywood.  Battleship.  The Avengers.

7 Responses to “Hollywood Addicted To Vampires. Why? Asks Jason.”