<br />An American military document just uncovered appears to detail an US Army plan that calls for detaining “political activists” at re-education camps staffed by military-hired “PSYOP officers” in both America and abroad.<br /> 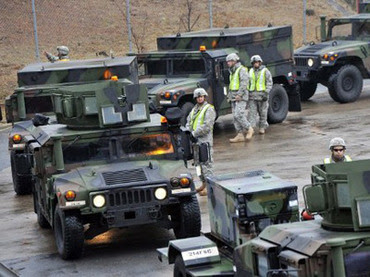 <br /> The website Infowars.com has unearthed the smoking gun, a copy of a United States military manual entitled FM 3-39.40 Internment and Resettlement Operations, which appears to offer Defense Department insiders instructions on dealing with the imprisonment of anyone considered an enemy to the American way of life and how to go about indoctrination them with an “appreciation of US policies and actions” through psychological warfare. <br />

<br />The PDF made available is dated February 2010 but has only now been leaked online. A copy of the document has been uploaded to the website PublicIntelligence.net for viewing, and additionally a version appears to be hosted on the US Military’s Doctrine and Training Publications page at armypubs.us.army.mil, although access to papers published there are unavailable to those without the Pentagon’s authorization, therefore making it impossible to verify the authenticity of the manual at this time. The military site that appears to host a copy has also implemented security measures on its servers that it cautions visitors are “not for your personal benefit or privacy.” <br />

<br /> Further, the title page of the manual warns that the material contained in its 326 pages is be distributed to US Defense Department and its contractors only, and that must be “destroy[ed] by any method that will prevent disclosure of contents or construction of the document.” “This manual addresses I/R [Internment and Resettlement] operations across the spectrum of conflict, specifically the doctrinal paradigm shift from traditional enemy prisoner of war (EPW) operations to the broader and more inclusive requirements of detainee operations,” the paper’s authors explain in the first paragraph of the documents preface. From there, it goes on to explain that the methods of psychological warfare and brainwashing of persons applies to “US military prisoners, and multiple categories of detainees (civilian internees [CIs], retained personnel [RP], and enemy combatants), while resettlement operations are focused on multiple categories of dislocated civilians (DCs).” <br />

<br />The manual continues by describing categories of personnel whom are certain guidelines of the manual apply. A detainee, for example, is any person captured by an armed force, but does not include personnel held for law enforcement purposes — except where the US is the occupying power. Civilian internees are described as anyone “interned during armed conflict, occupation, or other military operation for security reasons, for protection, or because he or she committed an offense against the detaining power.” “An adaptive enemy will manipulate populations that are hostile to US intent by instigating mass civil disobedience, directing criminal activity, masking their operations in urban and other complex terrain, maintaining an indistinguishable presence through cultural anonymity and actively seeking the traditional sanctuary of protected areas as defined by the rules of land warfare,” reads the paper. “Commanders will use technology and conduct police intelligence operations to influence and control populations, evacuate detainees and, conclusively, transition rehabilitative and reconciliation operations to other functional agencies.” <br />

<br />On their own part, Infowars.com details the manual by writing, “We have exhaustively documented preparations for the mass internment of citizens inside America, but this is the first time that language concerning the re-education of detainees, in particular political activists, has cropped up in our research.” Throughout the manual, the DoD outlines methods to go about detaining US military prisoners captured for both “battlefield and nonbattlefield confinement,” how to rehabilitate them to “ensure a successful return to society” and “psychological operations (PSYOP), practices and procedures to support I/R operations.” <br />

<br />Fifty-six pages into the manual, its authors explain the role of psychological operations officers regarding internment and resettlement, and explain that they will be responsible for developing methods designed “to pacify and acclimate detainees or DCs to accept U.S. I/R facility authority and regulations.” PSYOP officers, the manual adds, identify “malcontents, trained agitators, and political leaders within the facility who may try to organize resistance or create disturbances.” The manual also demands that the PSYOP officers overseeing the detainment camps identify “political activists” for indoctrination. TAP – I am sure they’ll have a section for bloggers, and I’ll be very grateful for the retraining, a bit like prep school in the 1960s There physical violence was used to back up ‘education’ by people who had little claim to high intelligence. Except this time, it will be ‘re-education’, and the Psy-ops could be of a higher standard. Oh well. At least it will make a change from Latin verbs! Sent in by anonymous from RT.<br />

3 Responses to “US Internment Camps Target Political ‘Activists’. The Control Grid Steps Up A Level.”