Thoughts on the ceremony.  Now we know that the globalists are Satan worshippers, it brings the thing to life when the priest asks, ‘Do you renounce Satan?’  We replied in unison, ‘I do.’  He liked the water showering over his head.  It cooled him down. 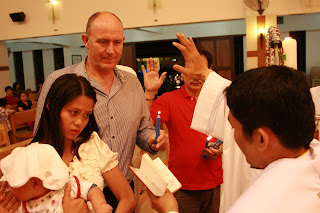 Today we fly.   Hopefully Sean won’t cry the whole way.  It’s a long flight.  Blog might not be attended for a while.  I’ll be back as soon as I can.  There’s loads coming in.  New followers.  New topics.   Much to do every day.  I enjoy it, despite much of the material being incredibly sad and downright evil.  There is a positive aspect to exposing the evils of the world.  The first step in us doing something about it all is to understand it, and know what is actually happening.

That said, we’ll miss the presence of relatives, maids, nannies and droves of friends, once we leave.  Sean never left a pair of arms for the first five months of his life here in the Philippines, day or night.  In the UK, there are no maids, (nannies are expensive and work set hours.  Here they are 24 hour effective family members.  Food is more important than money.), no banks of willing relatives and there are few passing friends to hold a baby for hours on end.  He could have quite a shock.   He will, though, be meeting his elder brother for the first time, who is running around the garden in anticipation.  He can’t contain his excitement at the new arrival in his life. 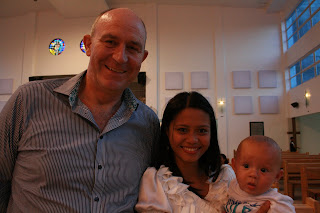 8 Responses to “Travel Today. Back To Britain.”