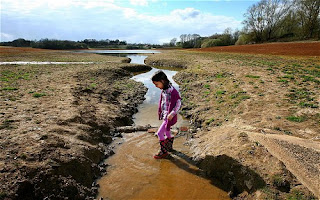 The shortage is caused entirely by an unwillingness to fix broken and cracked pipes, which is not the decision of the water companies, but the government and the EU…….

Hi Tap
An interesting piece in yesterday’s Telegraph by Christopher Booker, under the heading:  ‘Keeping the Country Short of Water is now Government – and EU – Policy’   Here’s the link (I hope)

One is the water companies’ failure to plug the leaks that are costing us nearly as much water every two years as is contained in all our reservoirs. The other is their failure to add to that reservoir capacity, which has barely increased in the 20 years since water was privatised, despite our 10 per cent growth in population.
What makes this particularly odd, however, is that only a few years back, the last government was gung-ho about the companies’ plans to build five major new reservoirs in the south of England alone, where the shortage is most acute, and to extend three others. So what happened to all those plans? One after another they have all been shelved or turned down altogether by the Government, as when last year our Environment Secretary, Caroline Spelman, vetoed Thames Water’s plan for a huge £1 billion new reservoir near Abingdon, saying that there was “no immediate need” for new reservoir building. This was only months after she had sent back to the drawing board another well-advanced scheme near Portsmouth.
Astonishingly, it now emerges, it has become quite deliberate government policy to keep Britain short of water. And the explanation for this baffling volte-face lies in a “Communication” issued in 2007 by the European Commission (COM (2007) 414 Final) “addressing the challenge of water scarcity and droughts in the European Union”.
Regards
Gillian
This from Steve –
Government must act to ensure a sustainable food supply
A cross-party committee of MPs calls on the government to develop a joined-up strategy to tackle the UK’s ‘unhealthy and environmentally damaging’ food system.
< http://www.channel4.com/news/government-must-act-to-ensure-a-sustainable-food-supply >
EXTRACT –  Committee chair Joan Walley MP says: “until there is clear public acceptance of GM and it is proven to be beneficial, the Government should not license its commercial use in the UK nor promote its use overseas.”
The Tap Blog is a collective of like-minded researchers and writers who’ve joined forces to distribute information and voice opinions avoided by the world’s media.