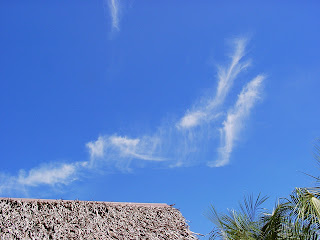 Take another look at my photos. Those wispy clouds are not water vapor. The photos show artificial clouds of particulate matter (fine dust). Look how it disperses. Post a few photos or even just the attached photo and see what your readers say. I’ve been watching the clouds here for almost seven years.

We are getting chemtrailed every day this month. I’ve been experiencing symptoms of breathing chemtrails all month: mild headache, mild burning eyes, coughing mucous, sleeplessness, weird dreams. Until this month I’ve been a really healthy guy. I have my own deep well, I drink buko juice from my own coconut trees, I avoid sweets, medicine, fast food, processed food and meat. This location where I live normally had fresh ocean breeze. I live clean so maybe I’m more sensitive to these new toxins than others.

Study those photos again. “They” would likely not suddenly spray a grid pattern. It would seem more logical they would be more sneaky about it at first. And with the wind, they would do most of the spraying off shore and let it drift toward the target area. We don’t have deep blue skies anymore, just light blue haze (except for about two hours Friday when I captured the attached photo). The rainy season doesn’t begin here until about the second week in June. I’ve already sent plenty of photos. I’m beginning to feel like I’m wasting my time (and yours).

Nothing will come of this anyway. People haven’t been able to stop chemtrailing anywhere else. I’ve even posted a few comments in the online local news here but people just ridicule and quote wikipedia about contrails and “conspiracy theory”. Anyway, I won’t bother you anymore. If I see a grid pattern or learn how to better capture sunset rainbow colors before I leave the country next month I’ll send you photos. Take care.


TAP – Chemtrails don’t stop into such a short line as a rule.  There could be clouds that assume that shape.  Until I see a plane actually chemtrailing, and then watch the clouds disperse over the next hour or two, I would not think there is chemtrailing going on in the Philippines.  You need to establish the claim to the point that there is no doubt.  I cannot do that from your photographs.

The effects you describe on your own health might an effect of HAARP mood control.  The Philippines has many ‘earth energy’ points which I found have been the thing to correct my own health problems, bringing my metabolism back into stable operation.  It’s the place I head for when I’m in poor condition.

5 Responses to “Take Another Look At My Photos”