Hi Tap, here is an interesting item regarding SOROS, to get away from Jesuits & Knights of Malta for a bit. Though I understand, Soros is a Papal Knight – A Court Jew who Kisses The Papal Ring, A BIG NAME, but Still Subservient to THE POPE.

This is Interesting I will include it in another Post, as this one is supposed to be about Soros.KNIGHTS OF MALTA: Initial Membership List ~ Who REALLY Controls America???

This relates to Soros Tailoring The European Human Rights for the purposes of his NGO’s to cover up Institutional Criminality. He was Fined for Insider Trading by ECHR in 2002, having used Similar Tricks.

Soros’ disingenuous use of “human rights” is not a strategy he holds an exclusive monopoly over, but rather one he executes in concert with very unlikely allies

Soros leverages “human rights” for personal gain – as does his global NGO empire.
by Tony Cartalucci 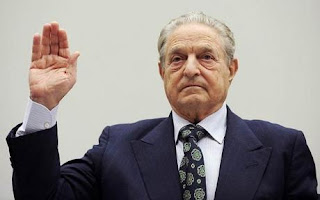 Image: Soros runs a global empire of NGOs leveraging “human rights” to cover up institutional criminality just as he himself just attempted to use “human rights” to excuse criminal insider-trading. Soros’ disingenuous use of “human rights” is not a strategy he holds an exclusive monopoly over, but rather one he executes in concert with very unlikely allies – Neo-Conservatives of the US State Department-funded National Endowment for Democracy and its various subsidiaries.

The court’s decision in rejecting the appeal was based on Soros being “a famous institutional investor, well-known to the business community and a participant in major financial projects,” and thus should have been “particularly prudent” regarding insider-trading laws. The contents of Soros’ appeal, based on “human rights” was not heard, and the details of the appeal not yet made public, however, it is an illustrative example of how Soros and global elitists like him leverage the legitimate cause of human rights and freedom as a means to execute and defend both individual and institutional criminal behavior.

Soros has built a global empire of networked nongovernmental organizations (NGOs) allegedly promoting “human rights,” “freedom,” “democracy,” and “transparency.” His Open Society Institute funds amongst many others, Amnesty International (page 10), Global Voices, and Human Rights Watch. In reality these NGOs constitute a modern day network of imperial administrators, undermining national governments around the world and replacing them with a homogeneous “civil society” that interlocks with “international institutions” run from and on behalf of Wall Street and London.  ……..