The way to solve the world’s suposed population problem is simple.  Make the world rich like Japan.  Once people become wealthy, they can’t be bothered having and raising kids.   The problem is that the global elites have gone for a policy of impoverishing the world, which triggers excessive breeding.   Human society has natural population control mechanisms, which are not being considered.   Here’s the story. 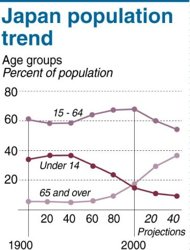 Japanese researchers on Friday unveiled a population clock that showed the nation’s people could theoretically become extinct in 1,000 years because of declining birth rates.
Academics in the northern city of Sendai said that Japan‘spopulation of children aged up to 14, which now stands at 16.6 million, is shrinking at the rate of one every 100 seconds.
Their extrapolations pointed to a Japan with no children left within a millennium.
“If the rate of decline continues, we will be able to celebrate the Children’s Day public holiday on May 5, 3011 as there will be one child,” said Hiroshi Yoshida, an economics professor at Tohoku University.
“But 100 seconds later there will be no children left,” he said. “The overall trend is towards extinction, which started in 1975 when Japan’s fertility rate fell below two.”
Yoshida said he created the population clock to encourage “urgent” discussion of the issue.
Another study released earlier this year showed Japan’s populationis expected to shrink to a third of its current 127.7 million over the next century.
Government projections show the birth rate will hit just 1.35 children per woman within 50 years, well below the replacement rate.  From yahoo.news via Steve
Japan Faces Extinction
The Tap Blog is a collective of like-minded researchers and writers who’ve joined forces to distribute information and voice opinions avoided by the world’s media.