Read this article typical of how the missing children hotline is being publicized, and see if you can spot the catch….. 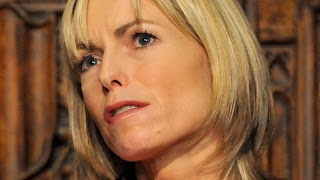 Kate McCann, invited to attend the launch of the EU wide ‘missing child’ hotline.  No mention of the real reason for its introduction.
Britain’s introduction of a new Europe-wide phone number to help find missing children is to be celebrated at a Downing Street reception.
The 116000 hotline is operated by specialist support groups in 16 EU countries, including France, Spain, Germany, Italy, Portugal, Greece, Holland and Poland.
An official website to help find the UK’s missing and abducted children – www.missingkids.co.uk – has also been relaunched ahead of International Missing Children’s Day on Friday.
Home Secretary Theresa May will host the reception in Number 10 for campaign groups, celebrity supporters and families of missing children.
Guests will include actress and singer Holly Valance and her property developer fiance Nick Candy, former EastEnders star Tamzin Outhwaite, broadcaster Sue Lawley and Kate McCann, whose daughter Madeleine disappeared in Portugal in 2007.
In Britain the charity Missing People will operate the 116000 phone line, which is free, confidential and available 24 hours a day.
The new redesigned website, providing the latest appeals to help find missing youngsters, is being run by specialist UK police agency the Child Exploitation and Online Protection centre (Ceop). It allows the public to download posters and in some cases includes age-progression images showing how children may have changed as they grow older.
The site also offers information for children who are missing or thinking about running away and advice on what families can do if a child in their care disappears.
Missing People chief executive Martin Houghton-Brown said: “Disappearances such as Madeleine McCann’s tragically demonstrated the need for co-ordination across the world when a child goes missing. 116000 is introduced so that people can call when someone disappears regardless of which EU country they are in.”
Equalities Minister Lynne Featherstone added: “Missing children and their families are vulnerable, and International Missing Children’s Day reminds us of the role we all have to play in protecting and supporting them. Government has set a clear direction for this with our missing children and adults strategy, calling on local and national organisations to prevent, protect and provide support for missing children and their families.” ENDS
TAP – I emboldened the important part.  The new department being set up is CEOP.  Child Exploitation and Online Protection Centre.   They don’t mention much about the real game here, which is that the Police now have powers to enter homes and investigate allegations of child abuse, made by absolutely anyone, even allegations made anonymously online.  They have powers of child removal.   Don’t you tell me that these will not be used, not to protect children, but to take children away from families, as required by clients of the pedophile industries.  Don’t tell me that political opponents of big government will not be targeted.  Who will know if any real allegations have been made in the first place?  Be afraid.  The state now has direct access and power to remove your children, without any cause needing to be proved.  The Police need only show that allegations have been made, requiring an ‘investigation’.
Anyone who trusts the courts to provide any defense to parents has no idea what is going on with the Family Courts.
As for the ‘missing children’, that provides a nice news cover for the real story of increasing state power over families.  No need for court orders now.   No need to hire criminals to procure children for rich pedophiles.  The Police can just come and collect them to order.
JULIA –  CEOP sounds like a private firm. Notice the number 116000, which upside down is 000911. If you read the title differently instead if how your brain is trained to do, you will get that it is a centre for Child Exploitation, and a centre for Online Protection. They are not being secret about what they are doing, it is all hidden in plain view.

They want a database of all their child victims. Why not get the public to compile it for them and pay for it? I have checked some of these websites, possibly this one, but there is an international one too, which has bankers and global corporation people on its board! You can search for the child you want by choosing a boy or girl, and an age range. Maybe there are other selecting factors too.

And it is not at all obvious how a public database will help us find any missing children, or even prevent them going missing?? It is a way of them collecting data about our children for their purposes.

The whole thing is one big smokescreen to justify offices, accommodation, travel, meetings, money etc, all for child abuse. All masquerading as a charity. And as usual, it is with our consent! How can you say NO to a missing children’s charity, people will think you are nasty.


The logo for CEOP is an Illuminati looking eye on top of a pyramid. This is also on school websites if a teenager wants to report anything nasty happening to them! No doubt that goes into the database too.


TAP – Gordon Logan said Britain’s children are a meat rack for the elites.