The parallels between the Mayan and the Balinese civilizations are so many and so close that it is hard to believe they are not from the same source.  Yet they are separated by the Pacific Ocean.  Have we all been taught a false version of history to hide the fact that mankind lived in peace for thousands of years?  It seems so. 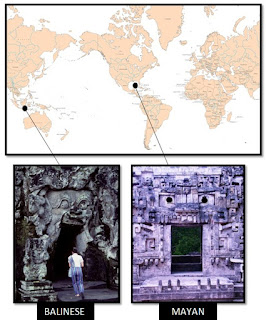 One of the greatest archaeological riddles—and one of the grossest academic omissions—of our time is the untold story of the parallel ruins left by two seemingly unrelated ancient civilizations: the ancient Mayans on one side of the Pacific Ocean and the ancient Balinese on the other. The mysterious and unexplained similarities in their architecture, iconography, and religion are so striking and profound that the Mayans and Balinese seem to have been twin civilizations—as if children of the same parent. Yet, incredibly, this mystery is not only being ignored by American scholars, it’s being suppressed.