We are happy to announce that The Intel Hub will be providing live on the scene coverage of Bilderberg 2012.

In anticipation of the meetings we have set up a new Facebook page, “Exposing Bilderberg 2012.” Link at foot of post. 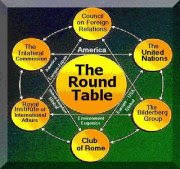 The Full Spectrum Of Globalist Control

This new page coupled with our livestream, twitter feed, and website will host exclusive photos and updates directly from the protests outside of the meetings.

If you are already on Facebook please consider helping us grow this brand new page!

The Bilderberg Group is an annual secretive meeting attended by elitists from politics, corporations, and the media.

For years mainstream outlets such as the Washington Post and the New York Times have attended the meetings and covered up for their dastardly plans!

Those times are over! The alternative media is growing and it is the job of free people around the word to OCCUPY and EXPOSE Bilderberg 2012!

For over 14 years, Daniel Estulin has investigated and researched the Bilderberg Group’s far-reaching influence on business and finance, global politics, war and peace, and control of the world’s resources and its money.

His book, “The True Story of the Bilderberg Group,” was published in 2005 and is now updated in a new 2009 edition. He states that in 1954, “the most powerful men in the world met for the first time” in Oosterbeek, Netherlands, “debated the future of the world,” and decided to meet annually in secret.

The Group’s grand design is for “a One World Government (World Company) with a single, global marketplace, policed by one world army, and financially regulated by one ‘World (Central) Bank’ using one global currency.”

— “one international identify (observing) one set of universal values;”

— a New World Order with no middle class, only “rulers and servants (serfs),” and, of course, no democracy;

— “a zero-growth society” without prosperity or progress, only greater wealth and power for the rulers;

— absolute control of education to program the public mind and train those chosen for various roles;

— “centralized control of all foreign and domestic policies;” one size fits all globally;

— using the UN as a de facto world government imposing a UN tax on “world citizens;”

— imposing a universal legal system; and

— a global “welfare state where obedient slaves will be rewarded and non-conformists targeted for extermination.”

TAP – Occupy is code for ‘let’s make havoc’ which will be the excuse Obama will use for creating martial law, abandoning what’s left of the Constitution and opening the camps. Intelhub could be playing his game here.