Nurses are not allowed to know what infections their patients have, such as HIV and hepatitis. Only the consultant will know this. So no one gets a complete picture of what is going on. They just have to assume that the people in charge know what they are doing, and do as they are instructed. Or pack in their job. I guess that means the nurses would not know if they were administering the wrong medicine for the patient. They just follow instructions. It also seems to create a climate of fear, as nurses are acting as if all patients have AIDS or hepatitis, because they don’t actually know which ones do, they’re all mixed in together, and no one can see the label. A similar thing is happening in the NHS labs. The scientists are not allowed to now which samples are infectious, they just have to process them, and they are not allowed to study them scientifically to draw their own conclusions! That is presumably done in another compartment, or not at all. This reminds me of Adam Smith on the 20 pound note, and his great achievement being the division of labour. Obviously an important part of The Illuminati Plan. Extract from Julia’s Daily Ramble. 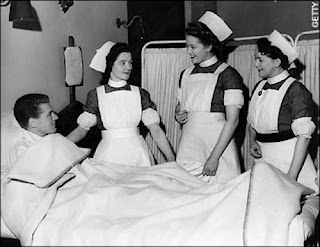 The Daily Telegraph thinks that there are other things being kept secret about nurses and the NHS.  Nurses ain’t wot they used to be.