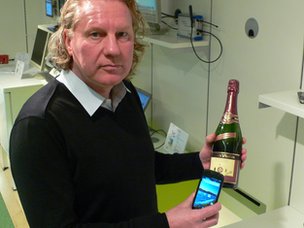 Smartphone with RFID reader identifies that the bottle of wine is the real McCoy.
The other method is to drink it, and see if you like it or not.  Consumers don’t care if big companies have to compete.  In fact we would prefer it if they had to do it more often.    Counterfeiting is just the excuse to start micro-chipping everything to control everyone.  Micro-chipping humans is planned next.

That’s a coincidence Roadhog. I wrote a blog post last week about microchipped dogs…. I can see the lost kiddie one coming too. The good news is that for most of this week, everything I have been thinking of, I come across someone else who seems to be thinking the same, as if the numbers of people seeing what is going on is increasing. It’s almost as if this kind of thinking is tipping towards mainstream!
http://suliwrites.wordpress.com/2012/05/09/microchipped-dogs/
And the is a related one about Your Emergency Care, another step towards microchipping…. http://suliwrites.wordpress.com/2012/05/06/your-emergency-care/

What pricked my ears about this sort of thing, happened in the early to mid 2,000s.

Clubcards or any other type of loyalty card, but particularly one that you will spend a fair bit of your income on.

Fairly early on, NuLabour applied for the NHS to have all personal details of clubcard holders passed to them. This was by government decree and the reason was as follows.

If there had been any food poisoning or any terrorist contamination of our food, the NHS/authorities could easily contact all the people who had bought the suspect food and get them into hospital for a health check.

All sounds fine & dandy and it was passed without out much kerfuffle, parliament. Why who could argue with something as sensible as that?

Er, well, once they’d got it through parliament, they could amend it without much trouble. And amend it they did. They added all government departments to be allowed access.

And one in particular, HMRC. So, they can now check your tax returns (if you’re self employed) against your spending habits.

I don’t ever think it was about the NHS, it was always about HMRC.

5 Responses to “Micro-Chips With Everything”