‘The poor must not pay for the mistakes of the rich’

Elections in so-called “democratic states” give us the illusion of choice while maintaining a status quo that sees the rich get richer and the poor scrambling to redefine their definitions of “rock bottom”.
In fact, the United States of America couldn’t be farther from being “the land of milk and honey” as it once proclaimed itself to be; its promise of wealth and stability, the oft-referenced yet seldom seen “American dream”, is undeniably buried in the realm of wishful thinking — for the majority of people, that is.

The good news is, that majority can no longer afford (quite literally) to stay complacent in the face of rampant financial exploitation by a ruling minority that knows no bounds to its powerlust. In his recent article, “Economic Austerity in America: The Portland Community Begins to Fight Austerity“, Shamus Cooke provides insight on how citizens are standing up to the hypocrisy and manipulations of America’s corporate elite:

“Those who caused the recession — Wall Street, the big banks and corporations — must be made to pay for it. The broader population can achieve this goal only if it is united and acts collectively. In Portland the first step was taken in this direction at this recent community meeting, where working people saw each others’ struggles as their own, understood the necessity of united action by the vast majority towards a common goal, and were inspired by the prospects of working together.”

And despite the mainstream media’s ongoing attempts to stifle news about the massive student protests that have been exploding in Montreal, Canada in recent months, the sheer scale of the actions and the determination of the protesters is only gaining momentum. As Richard Fidler wrote:

“The students have not been defeated… They have ignited a major debate in Quebec society, challenging neoliberal prerogatives and opening the prospect of “another Quebec” in which access to education will be a basic social need, available to all irrespective of income, and not a commodity for which access and content is a function of big business exigencies.” (See “Defiant Quebec Students Reject Shabby Government Offer“)

Cutbacks in education are not going to solve the budget crisis, and what corporate media conveniently avoid mentioning is the reality that the bulk of government funds are being shoved indiscriminately into defense spending. The US/NATO war agenda has been guzzling up financial and human resources at unprecedented rates.

From Julia‘s Daily Ramble –
TAP – A poster I saw on Facebook.  When you witness Police brutalizing and maiming demonstrators, it makes you think guns are a necessity.  The school shootings that drive the anti-gun movement are all set ups by the government, with drug fed mind control victims ordered into action – as was Breivik in Norway.
The gunman at Dunblane was a friend of several Labour Cabinet Ministers.  He was procuring children for pedophile sex on their behalf.  Blair issued a D Notice to silence the fact.  Governments are not to be trusted.  Yet as Julia says, the majority sit in silence.  All credit to Montreal’s students.  They used video and the power of the internet to stop the worst of the Police brutality.  There’s a message to be had there. 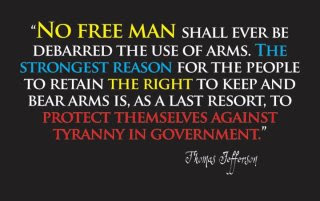