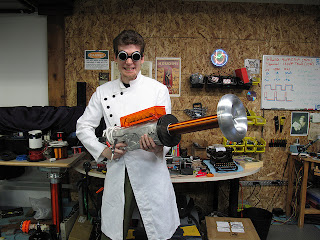 The year was 1889. The War of the Currents was well underway. At stake: the future of electrical power distribution on planet Earth. With the financial backing of George Westinghouse, Tesla’s AC polyphase system competed for market dominance with Edison’s established (but less efficient) DC system, in one of the ugliest and most epic tales of technological competition of the modern age.
More than a hundred years after the dust settled, Matt Fraction and Steven Sanders published The Five Fists of Science: a rollicking graphical retelling of what really happened at the turn of the last century. (Get yourself a copy and read it immediately, unless you’re allergic to AWESOME). On the right is the cover to this fantastic tale of electrical fury.
See that dapper fellow in front? That’s a young Mr. Tesla. See what he’s packin’?
Yep. Tesla Guns. Akimbo.
As I read this fantastic story, gentle reader, certain irrevocable processes were set in motion. The result is my answer to The Problem of Increasing Human Energy: The Tesla Gun. For reals.
The Tesla Gun is a hand-held, battery powered lightning machine. It is a spark gap Tesla coil powered by an 18V drill battery. You pull the trigger, and lightning comes out the front. 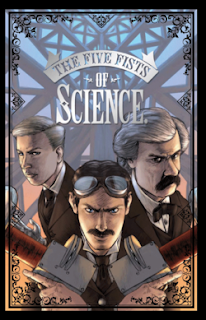