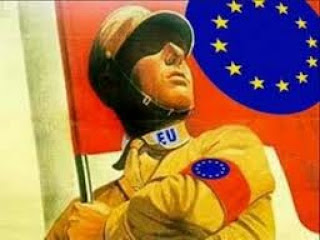 Senior Eurocrats are secretly plotting to create a super-powerful EU president to realise their dream of abolishing ­Britain and other nation states, UK media has revealed.
A covert group of EU foreign ministers has drawn up plans for merging the jobs currently done by Herman Van Rompuy, president of the European Council, and Jose Manuel Barroso, president of the European Commission.
The new bureaucrat, who would not be directly elected by voters, is set to get sweeping control over the entire EU and force member countries into ever-greater political and economic union. Tellingly, the UK has been excluded from the confidential discussions within the shady “Berlin Group” of Europhile politicians, spearheaded by German foreign minister Guido Westerwelle.
Opponents fear the plan could create a modern-day equivalent of the European emperor envisaged by Napoleon Bonaparte or a return to the Holy Roman Empire of Charlemagne that dominated Europe in the Dark Ages. They are concerned that David Cameron’s coalition Government is doing nothing to prevent the sinister plot. The secret talks were uncovered by Independent Labour peer Lord Stoddart of Swindon.
“This is a plot by people who want to abolish nation states and create a United States of Europe,” he said. “The whole thing is barmy. These people are determined to achieve their final objective.
Read more here:  stratrisks.com/geostrat/5929
Sent in by Joe from beforeitsnews

This must be what Christopher Story called the DVD – Deutsche Verteidigungs Dienst (DVD), Dachau

I think this was C Story’s www publication. Rumour has it that he was killed:

THE EUROPEAN UNION COLLECTIVE:
Students of the long-range pan-German hegemony and control operation known as the European Union will be aware that the Maastricht Treaty of 1992 (which this Editor fought hard against) was a crucial ‘stage’ in the evolution of the European Union Collective.

Interesting to know what G.L thinks of this…Story wasan advisor to Thatcher.