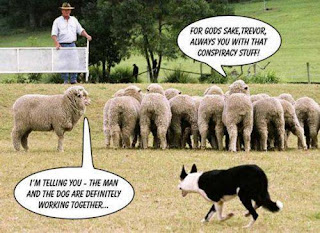 Politicians.  Media.  Finance.  The Military.  The Music Business.  Education.  ‘Health’.  Royalty.  All working as one?

In our popular culture we have a number of things… TV and radio probably primarily, that are the constant means by which the opposition has access to our brain and to our children’s brains. So I think the logical conclusion, and one of the common-sense conclusions is that if you don’t want the enemy to have access you have to cut off the lines of access… which would be in homes to simply either eliminate altogether, or control by other forms….
D.L.D: Take the networks at their word. They say, “if you don’t like our programming, turn it off”. And we should. We should say, “Yeah. You’re right.” And we should turn it off. And let the advertisers spend their money on an audience that isn’t there.

The first decade of the 21st century has witnessed the West’s embrace of extremism in all of its manifestation both in domestic and foreign policy. Extremism is a common practice by self-styled conservatives, liberals and social-democrats. In the past, conservative implies preserving the status quo and at most tinkering with change at the margins. Today’s ‘conservatives’ demand the wholesale dismantling of entire social welfare systems, the elimination of traditional legal restraints on labor and environmental abuses. Liberals and social democrats who in the past, occasionally, questioned colonial systems have been in the forefront of prolonged multiple colonial wars which have killed and displaced millions in Iraq, Afghanistan, Libya and Syria.
Extremism both in terms of methods, means and goals has obliterated the distinctions between center left, center and rightwing politicians. Moderate opponents to policies subsidizing a dozen major banks and impoverishing tens of millions of workers are called the “hard left”, “extremists” or “radicals”.
In the wake of the extremist policies of public officials, the respectable, prestigious print media have engaged in their own versions of extremism. Colonial wars that devastate civil society and materially and culturally impoverish millions in the colonized country are justified, embellished and made to appear as lawful, humane and furthering secular democratic values. Domestic wars on behalf of oligarchies and against wage and salaried workers, which concentrate wealth and deepen despair of the dispossessed are described as rational, virtuous and necessary. The distinctions between the prudent, balanced, prestigious and serious media and the sensationalist, yellow press have disappeared. The fabrication of facts, blatant omissions and distortions of context are found in one as well as the other……


………Syria: How the FT Absolves Al Qaeda Terrorists
As western backed terrorists savage Syria, the Western press, especially the Financial Times, continues to absolve the terrorists of setting of car bombs killing and maiming hundreds.of civilians. With crude cynicism their reporters shrug their shoulders and give credence to the claims of the London based terrorists propaganda mongers, that the Assad regime was engaged in destroying its own cities and security forces.

5 Responses to “It Made Me Chuckle………….And Then Think”