“It felt like end of the world” By Malou Inocando Tabar (The Freeman) Updated May 19, 2012
source
CEBU, Philippines – Aid immediately reached 500 individuals affected by what has been described as a combination of a whirlwind and a hailstorm that hit three mountain barangays of Pinamungajan town last Thursday.
This was how 52-year-old Generoso Gracia described the phenomenon.
A total of 96 houses were damaged and 56 others were wiped out in the 15-minute ordeal that hit the sleepy mountain barangays of Lamac, Pung-ol and Sibago.
Pinamungajan lies on the west coast of Cebu Province and is about 65 kilometers from the heart of Cebu City.
Worst hit was Purok African Daisy where several houses were wiped out.
Most of the houses in the area were made of light materials. Residents of the said barangays rely mostly on agriculture as their means of livelihood. 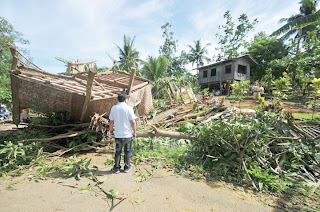 Gracia was inside his house when the whirlwind hit at about 1:15 in the afternoon.
He just noticed that it was very cold and the winds were fierce. There was no thunder but he noticed lightning.
“Ang liti nagtagbo. Ang hangin isog kaayo. Nakaingon ko bahinon man kaha ning langit tingali. Ang ako lang ato nga ug diri na mang lang gyud gani mi kutob, unta magkatapok lang mi sa akong pamilya,” (There was lots of lightning. The wind howled. I thought that the heavens would split up. I even thought that it was our end and I was hoping my whole family was together) Gracia said.
He said that the strong winds shook his house and his head got hit by ice that was as big as a fist.
His brother Panio was wounded on his shoulder, his nephew, Virgilio Mahusay, was also wounded on the ear. They were working on their house when the whirlwind and hailstorm occurred. 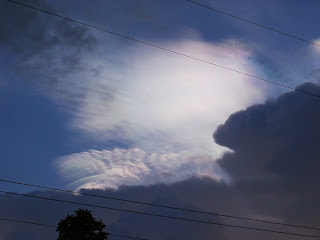 TAP –  Ice storm in the tropics?  Philippines weather’s going as odd as that in the rest of the world.  There are no chemtrailing planes visible anywhere as I can see, but weather control could well be operational here with the usual rain patterns deviating from normal.  Story sent in by Anonymous In  cebu with pictures of ribbed clouds, and other strange looking patterns in the sky he observed recently.  He lives near Mactan on Cebu island.  Click pictures to expand.  That could be HAARP.
The Tap Blog is a collective of like-minded researchers and writers who’ve joined forces to distribute information and voice opinions avoided by the world’s media.

2 Responses to “It Felt Like The End Of The World”