There is a big British angle to this story, with Theresa May involved. The Rothschilds are widely expected to be preparing a false flag attack on the London (ZION) Olympics. This may be it. One way or another, the PTB are cooking up something big in furtherance of their programme of global chaos and pauperization.

The same PTB have launched a new attempt to (illegally) force me and my family to go back to China. The appeal (which will no doubt be tampered with as usual) will probably be in June. 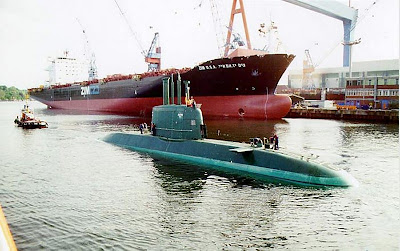 German built Dolphin class submarine. These don’t normally disappear while still in port. They are on the surface FGS.

A nuclear weapon that wasn’t supposed to exist, a single 500 kiloton hydrogen bomb, one of four being tracked, was seen being loaded at the German port of Bemerhaven, Germany.

The submarine disappeared while being tracked by every sophisticated device NATO seems to be able to own or borrow. At least one of those from among the listed agencies was arrested by the local police force in Oxford, their electronic surveillance gear siezed, were confined for 12 hours despite being above arrest and detention as a senior NATO intelligence officer.

There have been emails and comments recently stating that people fear something big is going to happen at the London Olympics. One came in today from a New Zealand sports TV professional saying he feared something big was being planned, This could be what everyone’s on about. Nasty stuff.

I hope your appeal goes OK with regard to the legal action being brought against you. I am sure the readers of this blog all support your efforts. Thanks for keeping us posted with your latest thoughts,
.
UPDATE – Zheng Yong notified of a John Kettler report confirming the loss of the submarine. See comments. Kettler merely overlays an ET/EDs explanation over the Veterans Today Report. Are we in the realm of the paranormal, or disinformation? It’s May 1st not April 1st. Gordon Logan usually keeps to more hard-headed material. I’m not sure which box to put this in….a pre-court-case Loganberry! What do readers make of it?

As regards Benjamin Fulford, he is presumably dependent on the Japanese authorities for his protection and may well be under some sort of obligation to minimize extent of the Fukushima catastrophe. Japanese people with children should be very concerned indeed. The most important thing to remember is that Ouzunov et al of NASA detected the ionospheric heating over Japan caused by HAARP immediately prior to Fukushima. The Gakona resonant frequency heater was also switched on during these days. That is as good as proof. The Sechuan earthquake was another HAARP attack and split a mountain concealing a Chinese nuclear weapons store. The characteristic rainbow effect caused by HAARP at Sechuan can be seen on YouTube. HAARP precursors are very distinctive, which is why Obama refuses to finance research into earthquake precursors. Anybody who denies the HAARP problem simply hasn’t done his homework and that includes the vast majority of seismologists on fat salaries.

The British connection to this story is interesting insofar as it might result in official leaks of information tending to confirm the story. There may also be leaks in Germany. Gordon Duff is a reliable and well connected journalist and clearly has confidence in his sources. I was surprised that he tagged Kettler’s ETs/EDs story onto his own story. False flag attacks are directly related to the gullibility of the victim nation. Italy has not been a victim thanks to the revelations from the Italian military intelligence officers who were behind the Red Brigades and Gladio. The British on the other hand are so ignorant that they would be quite ready to believe that Al-Qaeda had attacked London with a 500 kiloton nuclear device. False flag attacks require the ongoing complicity of the BBC and Rupert Murdoch.

For latest on Fukushima fall-out effects on the world, Global Research has put together a detailed report. It is totally shocking. It says Japan is finished as a nation. See below.

Back in Bremerhaven, was this the use of some futuristic weapon which makes ships literally disappear – into a different dimension? John Kettler talks of aliens possessing such technologies. What if such technology is in fact already in the possession of the elites? They would just have to use it, wouldn’t they. They are working to build up public belief in potential alien attack and alien presence amongst us. Reports of disappearing subs is exactly the kind of stunts they need to pull, to bring such beliefs about. These look like Olympic-sized deceptions, just three months ahead of the real event, and Illuminati symbols plastered all over the stadium, the location and the events to come.