A Tap Blog commentator tells us he is getting serious harassment today, with his internet link crashing for hours after commenting on here about what must be a very sensitive issue.

I’m putting this note together as my last one after I mentioned Fylingdales my mobile went. Into lockdown. I’ve been 4 hours and just got it to respond so I did notamage (TAP – manage) to say all I wanted to on my last piece.

Near Harrogate and on the edge of the Pennines. Is a USA base that’s top secret. You can pass bye it and there are loads of big round balls that look like golf balls. The interesting thing happens if you stop. Within a minute a car will drive past you slow then another couple of minuets a car will stop nearby with a couple of blokes in. They’ll watch you till you move on. We understand it’s a listening station and I have no reason not to believe it. But it would be the ideal place to monitor the Internet. 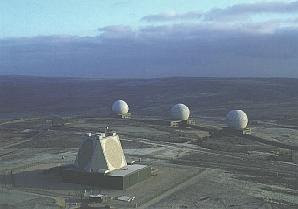 We thought these devices were there to spot incoming ICBMs. What else might they be up to?
Fylingdales……

On the North Yorkshire Moors where nobody can get near. But you can see this massive pyramid for miles around. I give up mentioned this place again and it’s took another hour to get control again.

TAP – Blimey, anonymous That’s like you’re in occupied France in WW2, trying to work your portable radio set and tell us the enemy’s dispositions, before the Nazis show up and drag you off to Sachsenhausen. I wonder why they’re so bothered. Fylingdales is not unheard of exactly. What are they so concerned about? Maybe that’s the HAARP station that’s directing the attack on Yorkshire’s good citizens – from their own back yard….

His last signal before enemy countermeasures closed him down was this –
Hello all you conspirators, I live just south of Leeds, which is around 30miles north of Doncaster. I can see from my hill top position from east to west over South Yorkshire. As the person from Doncaster said there had been heavy chemtrailing over South Yorkshire.

In fact from where I am (and it’s a very rough estimate) I would say from Doncaster to Sheffield. If you check out today’s weather you will see from the satellite picture heavy clouds and rain Doncaster to Sheffield. So there is something in it. I have been watching the sky over the past few months because of this blog. The chemtrails never come over Leeds or anywhere near Menwith Hill???.

I mention Menwith Hill because it is full of “golf balls” as we call them. But I think the most interesting place isn’t this one but Fylingdales on the North Yorkshire Moors. It is one giant pyramid, and is known as the USA early warning place. I think it’s a contender as HARRP system.

TAP – Who knows what goes on where with all these golf balls, and dishes? Yorkshire seems to have more than its fair share of them….and if a harmless blogger dares even mention them, he gets closed down in two seconds. Any one any idea why?

12 Responses to “Fylingdales. Why Are ‘They’ So Bothered?”