Hi Tap, this is another article by Tony Cartalucci, I find that they are very worthwhile reading, as he has a thorough understanding of what he writes. I have sent in Stuff by him in previous Posts.
Empire’s Double Edged Sword: Global Military + NGOs
Tearing down sovereign nations & replacing them with global system administrators.
by Tony Cartalucci
The British Empire didn’t just have a fleet that projected its hegemonic will across the planet, it possessed financial networks to consolidate global economic power, and system administrators to ensure the endless efficient flow of resources from distant lands back to London and into the pockets of England’s monied elite. It was a well oiled machine, refined by centuries of experience.
Part 1: Imperialism is Alive and Well
There are several pertinent examples illustrating how imperialism is still alive and well, and only cleverly disguised with updated nomenclatures.  British frequently extorted from nations under its “gunboat diplomacy” strategy – that is, anchoring gunboats off the coast of a foreign capital, and threatening bombardment and military conquest if certain demands were not met. 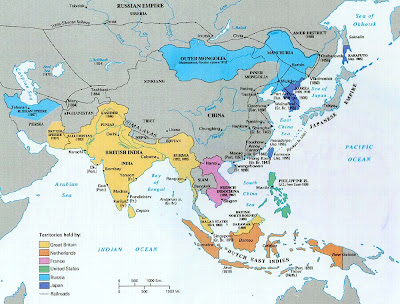 Colonial Southeast Asia circa 1850’s. Thailand/Siam
was never colonized but made many concessions.

In the mid-1800’s, Thailand, then the Kingdom of Siam, was surrounded on all sides by colonized nations and in turn was made to concede to the British 1855 Bowring Treaty. See how many of these “gunboat policy” imposed concessions sound like today’s “economic liberalization:”

1. Siam granted extraterritoriality to British subjects.
2. British could trade freely in all seaports and reside permanently in Bangkok.
3. British could buy and rent property in Bangkok.
4. British subjects could travel freely in the interior with passes provided by the consul.
5. Import and export duties were capped at 3%, except the duty-free opium and bullion.
6. British merchants were to be allowed to buy and sell directly with individual Siamese.

A more contemporary example would be the outright military conquest of Iraq and Paul Bremer’s (CFR) economic reformation of the broken state. The Economist enumerates the neo-colonial “economic liberalization” of Iraq in a piece titled “Let’s all go to the yard sale: If it all works out, Iraq will be a capitalist’s dream:”

1. 100% ownership of Iraqi assets.
2. Full repatriation of profits.
3. Equal legal standing with local firms.
4. Foreign banks allowed to operate or buy into local banks.
5. Income and corporate taxes capped at 15%.
6. Universal tariffs slashed to 5%.
The Economist argued, as would any 18-19th century imperialist, that Iraq needed foreign expertise to catch up, justifying the evisceration of their national sovereignty and the foreign stewardship (theft) of their resources
Unlike Siam, Iraq refused to concede to the “gunboats” of modern-day Wall Street & London, and often as the British did during the “glory days” of the empire, they made good on their threats.
The British  found diamonds beneath Zululand during the late-1800’s, they invented a Political Excuse to Declare War, with the inevitable deaths of thousands & the  destruction of the Zulu Kingdom, I am sure you can draw modern day parallels. with Iraq & Libya viz modern-day global imperialism before commencing its plundering.
At the conclusion of the Anglo-Zulu War, the British despoiled Zululand, divided it into 14 separate cheifdoms, & Installed their PUPPETS, internal rivalries ensured that unity would never exist again, thus securing Britains Interests, here again one can see parallels, to Todays “accidental” consequences of military interventions.
Part II:   British Imperial Administration (proto-NGOs)
Using Georgia as a case study Trevor Reese iillustrates every facet of British Colonial Policyhere is the pdf Link to it  Colonial Georgia: A Study in British Imperial Policy in the Eighteenth Century
The colony of Georgia,  founded by what is essentially a proto-NGO – and in this case an organization dedicated to “prison reform.” What it really did, was assess suitable prisoners in London who could be sent to Georgia to fulfill the needs of the Crown. Beginning as the “Associates of Dr. Bray” and later becoming the “Trustees for the Establishment of the Colony of Georgia in America,” or simply the Georgia Trustees, its purpose, exploitation human tragedy for the benefit of the elite. NOT MUCH HAS CHANGED THEN HAS IT?
Protestantism for England was also a precursor to modern day NGOs. Religious denominations were divided directly along political lines in 18th century Europe, and when shiploads of Protestants were sent to Georgia…..
…………………..
Similarly today, NGOs have truly dedicated people “inspired” as the “Trustees” were, but ultimately they are carrying water for their sponsors, who almost always end up being George Soros, the OCED, the US State Department’s National Endowment for Democracy, and other purveyors of global corporate-fascist imperialism. 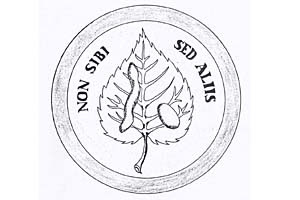 One face of the Georgia Trustee’s seal. It featured the Latin motto, “Non Sibi Sed Aliis” which means, “Not for self, but for others.” Truly a proto-NGO, a “system administrator.” The significance of the mulberry leaf, the silkworm, and the cocoon? The silk that Britain’s new colony of Georgia was going to export to London to enrich the empire. “For others” indeed.
The British Empire’s interests in Georgia were economic.
Today’s concept of “free-trade” agreements ensure that resources, manufacturing, refinement, and consumption are equally interdependent on a global scale despite the fact that technology now exists to make any state or province, let alone nation, fully independent economically. …………………….
Part III: Re-imagining Imperialism for the 21st Century
We have already seen some examples of how imperialism is very much alive and well. We also saw how imperialism was implemented by the British, but how exactly is it being implemented today? And why are people willingly going along with it?   ……………………….
Video:  The Pentagon’s New Map for War & Peace.”
Thomas Barnett describes the building of an army of “system administrators” (aka civil society) to expand into “peace spaces” while US global military conquers “battle spaces.” Soros’ Revenue Watch along with the National Endowment for Democracy have created just such an army of NGOs. And just as soldiers witlessly promote imperialism believing they are fighting for “freedom,” these NGOs expand Wall Street and London’s global hegemony, believing they are promoting “human rights.”
The term “system administrators” was used by US military strategist Thomas Barnett before a cackling audience at a 2008 TED Talk titled, “The Pentagon’s New Map for War & Peace.” Atabout 18 minutes into his talk he begins explaining a concept of reforming the military into two separate forces, the “US enabled Leviathan force” and the “system administrators.”  …………..
Barnett warns that if anyone attempts to interfere with the construction of the West’s “system administrator” networks, the “Marines are going to come over and kill you.” This perhaps like British garrisons did to tamp down dissatisfaction amongst their colonies 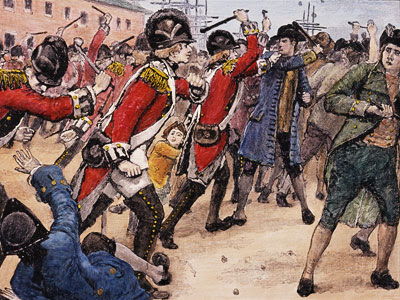 The talk was given in 2008, and already we see solid steps being taking to expand and utilize just such a force. Barnett said of the special operations “trigger pullers” that he wanted the rules to be “as loose as possible.” Just recently, the Corbett Report and Media Monarchy reported the expanded role proposed for “elite” military forces. Admiral William McRaven of Special Operations Command was said to be seeking “more autonomy to position his forces and their war-fighting equipment where intelligence and global events indicate they are most needed.”
NGO’s exist in many Guises  ………. Read the article to find out, how & why ……………….
Part IV: Empire’s Weakness is Independence
Empires require subjects. Without subjects there is no empire. There is no fleet, there are no Marines, there are no imperial administrators. There are no laborers to gather and send resources back to be refined, no one to refine them in the factories and send them back, and surely no one to buy these manufactured goods when they arrive.
Empire requires subjects to be preferable ignorant, easily manipulated, indoctrinated in a manner that motivates them to carry out their necessary function within the empire reliably. They need subjects that believe in the empire and most importantly, they need subjects who are hopelessly dependent on it. It is no coincidence then that nations declared their “independence” from England in pursuit of their freedom
This truly measurable independence turned out to be the key to their success, for independence is freedom, and freedom from tyranny is victory. The battle they fought was not one to free themselves, instead, it was fought to defend the freedom from the British system they had already achieved.
Before the great battles of the American Revolution took place and the victory that followed, the Founding Fathers took it upon themselves to declare their independence not only by writ, but also by action. Our Founding Fathers ceased the import of British goods, they created their own monetary system, they assembled their own militias, and most importantly they formed their own government based upon their own values, not King George’s self-interest.  ………………
READ ON IF YOU ARE INTERESTED – YOU SHOUL BE!
Fixing these problems unfolding overseas starts with fixing the problems in our own backyards. Boycott the globalists, cut off their support, undermine their system, and they lose their ability to commit these atrocities. That will be a real revolution and it can start today. Not burning cities and masked rebels waving flags, but communities no longer dependent and fueling a corrupt system we all know must come to an end.“
REGARDS  …………..  WASP
The Tap Blog is a collective of like-minded researchers and writers who’ve joined forces to distribute information and voice opinions avoided by the world’s media.