Sent in by WASP. 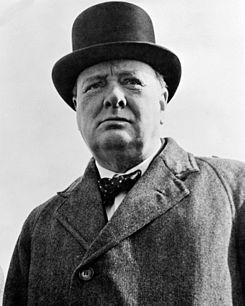 Winston Churchill in 1941.  Not quite the national hero everyone believed him to be at the time.  In fact one of history’s greatest frauds.  Illegitimate son of Edward 7th.  Great grandson of Nathan Mayer Rothschild, Queen Victoria’s father, whom he resembled.  Member of The Pigrims, The Illuminati.   A secret society, ready to exterminate half the world’s population to bring on a ‘New World Order’ – a worldwide totalitarian communist state, with a tiny elite in control of everything.  His world famous speeches were spoken by the actor Norman Shelley, and written with professional help.

Referring to the power of the organization, in a speech at the House of Commons on August 20, 1941, Winston Churchill (a member) said, “No one could stop it. Let it roll on in full flood, inexorable, irresistible.‿ I believe the reason why the name Pilgrims was chosen is an open secret, like their very existence. The original Pilgrims, who came over on the Mayflower centuries earlier, left the old world to found a New World where they believed they could live life their chosen way.
These other Pilgrims, whose Royal roots trace back at least to early medieval times in Britain and Europe, are leaving the present world system and gravitating towards a New World—a New World Order.
I have compiled enough information on these men to write millions of words length. That won’t be possible here. I intend to give a summary as best I can.
If anyone wishes to employ the term “conspiracy,‿ I have no quarrel with that. This is precisely what we are examining. To believe otherwise is the summit of childish naiveté. Use the word intrigue instead if you assimilate it easier.
Other applicable terms such as “Illuminati,‿ dating to an Austrian professor on May 1, 1776—Mayday— are heard. They are elitists who know how the world should be ordered, the rest of us are clueless. And they will do anything to achieve that order, even if it calls for the extermination of half the world’s population—which appears to be part of the plan.
blogs.albawaba.com/Alexande…york_1903
TAP – Churchill, in the extract above, sounds like it was all a bit above him.  It probably was.   He spoke of a higher cabal running the war – orchestrating the actions of all sides to bring a pre-planned result.  He said that that  winning WW2 would be The British Empire’s Finest Hour, knowing quite well that a key plan of both world wars was to bring the Empire to an end.
Incidentally I was at school with Norman Shelley’s son, Anthony.  He was into music and nothing else.  He cheated his Latin by copying his neighbors, even putting his neighbor’s name at the top of the page, on one famous occasion!   (I’m sure we’ve all done worse)
ANON COMMENT – Hi Tap, Our family thought it was strange when the National lottery bought the scraps of paper off the Churchill family for 14 million pounds, when money was worth something.

The memoirs have been hidden since.
The Elite were frightened of anyone else looking into Churchills past.
They might have found out he was an art forger as well as liar.
He was just a paid puppet who never was in any action, and kept away from danger.

One Response to “Churchill Described The New World Order In 1941.”