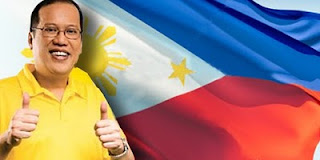 President Noynoy Aquino as he presented himself at election time.  He seems oblivious to the dangers to his country, and to his caste.


TAP – The Philippine government continues to raise tensions with China, as requested by the Global elites, who have failed to get WW3 started in The Middle East with US generals backing out of it and refusing to fight.  The push to challenge China over its presence in The Scarborough Shoal is the next game to push the world into global warfare.  The elites want a war with China now while they think they can crush China and wound the USA, leaving all the world’s nations in a  crippled state and in need of more global governance.  The Philippines is being used as the next tool to achieve this end.  The Philippine President is happy to go along with the request by President Obama that he raises the temperature with China – to create a war which the Philippines could never gain from.  The global elites would secure their position, but maybe not the Filipino elite families.  A war could end their domination and bring the Philippines under direct international rule, a country no more.  Whatever the rights and wrongs of the territorial dispute, it seems a crazy way to go about things.  War with China will shatter the Philippines.  Nothing would ever be the same again.  Noynoy probably feels safe doing what an American President is telling him to do.  He shouldn’t be.


The month-long diplomatic row between the two countries heated up a notch after China warned its citizens in Philippines that they were not safe there on a day of anti-China protests on Friday.

was going out of control and China was being pushed into a corner with no option but to use arms. The advisory said Chinese in Manila and other cities of Manila should avoid going out of their homes and keep away from areas where demonstrations were being held.

Reports from Manila said several hundred protesters waved flags and placards at the Chinese embassy in Manila, calling for China to withdraw its ships from a South China Sea shoal. Hundreds of policemen were deployed near the Chinese Consular Office.
The two countries have been locked in a stand-off in disputed waters at the Scarborough Shoal, called the Huangyan island by the Chinese, since 8 April. Non-military ships from both countries have been deployed in the area.
In a strong opinion piece, the official Xinhua news agency said late on Thursday: “The Chinese people are enraged by the offensive behavior of the Philippines over the Huangyan Island dispute, expressing full support to the efforts made by the Chinese government for safeguarding its territorial sovereignty. In defiance of China’s warning and stance of resolving disputes through diplomatic ways, the Philippines keeps making trouble in the waters around Huangyan Island, China’s indisputable territory.”
The article added: “In early April, the Philippines sent a warship to harass 12 Chinese fishing vessels which sailed into the waters of Huangyan Island to shelter from bad weather.”
“No matter how willing we are to discuss the issue, the current Philippine leadership is intent on pressing us into a corner where there is no other option left but the use of arms,” the China Daily said.

THERE’S MORE GOING ON.  THE US WANTS TO RE-MILITARISE THE PHILIPPINES

More details of the deepened U.S.-Philippine security cooperation are likely to emerge when Aquino visits the White House this summer.
Last year, the U.S. announced deployments of forces in northern Australia and plans to dock Navy vessels in Singapore, as it rolls out its strategic pivot toward the Asia-Pacific. There are expectations that a planned relocation of troops from Japan could involve more troop rotations through the Philippines as well.
http://www.thejakartapost.com/news/2012/05/12/us-philippine-alliance-deepens-amid-china-tensions.html

TAP – The China confrontation is a big wind-up to get Filipinos onside with renewed militarization.  The country would do better to declare neutrality while it still can, and escape heavy involvement in renewed world conflict.  Why be the globalists’ puppet any longer?  China’s not the problem.  It’s the elites who are manipulating the Philippines and China into an unnecessary conflict.  Only through warfare can they maintain their world dominant position.  Don’t keep helping them, Filipinos.   Help yourselves.

The media in China is whipping up the dispute, but who owns and controls the Chinese media?  Probably controlled by the same forces that want to bring war to the world.

Lian Liang, a 28-year-old graduate student at a Manila business school who is originally from the southern Chinese city of Guangzhou, said she came to the rally to take photos and send them home to China.
She said several of her friends had canceled their plans to visit the Philippines.

“The Chinese media is saying the Philippines is evil,” she said, adding that she was not taking sides in the territorial issue. “I want to tell my family in China that the Filipino people are friendly.”

TAP – The people could settle the dispute in ten minutes.  It’s governments controlled by globalist interests that create wars.  The Philippines needs to understand that, and stop playing the globalists’ games.  The Chinese too.

One Response to “The USA Wants To Remilitarise The Philippines”