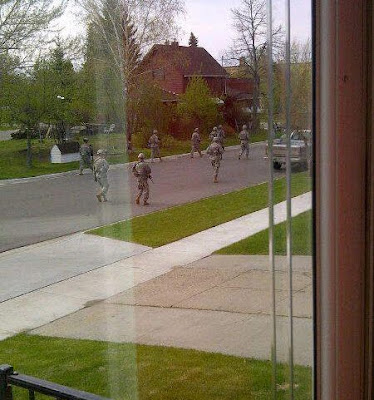 Why are you here, asked the Crookston, Montana resident. ‘To be honest, Ma’am, I don’t know,’ replied the soldier.

The photo shown above was taken by a subscriber in the city of Crookston, MN from the front porch of her suburban home. No, the men pictured aren’t from the local high school’s J.R.O.T.C sqaud – they are in fact trained soldiers serving in the Minnesota National Guard, Unit 2-136 CAB / B Company. Now, I have never personally been to Crookston (although I’m sure it’s lovely), but I’m relatively confident that they are located on domestic soil, and unless I am missing something, the citizens of Crookston weren’t dealing with any natural disaster at the time this haunting snapshot into the coming police state was taken.

No, what was actually going on that morning was a “training exercise” involving a quiet neighborhood that probably isn’t that different from your own. Being the patriot that she is, Maggie decided it might be a good idea to start asking some questions. Nothing too difficult, mainly just what the hell they were doing walking fully armed down a street regularly used to facilitate the innocent pastimes of all American kids.

Glancing at her briefly one Soldier responded, “Just training Ma’am. Joining up with another patrol at the rally point.”

Not accepting this as a reasonable answer to her inquiry, Magge went on, “Oh, ok. What are you training on the streets of town for exactly?”

At that the young soldier replied, “To be honest ma’am, I don’t know.”
The reason for his domestic training exercise that morning might be unknown to him, but sadly this is not only just another indicator of the uncertain times ahead, but also a revealing indicator of how worried the Feds are of a possible outbreak of civil insurrections across the nation.

from Joe of beforeitsnews

2 Responses to “Be Ready For The Coming Police State”