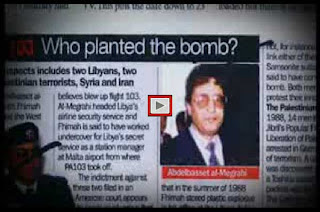 This post was first published on The Tap Blog in September 2011.


The Libyans didn’t do Lockerbie.


Susan Lindauer in her book Extreme Prejudice says they didn’t do it. She should know. She was the US’ prime contact with Libya prior to the Iraq War in 2001. She says it was Abu Nidal.

Now you can find more stuff at www.cryptome.org saying the Scottish police office called Golfer has admitted the CIA planted the evidence on Al Megrahi.

More stuff is coming out on cryptome.org
Cryptome
14 September 2011
A sends:
Premier Glasgow libel lawyers Bannatyne Kirkwood France are issuing the
following little missive to any site hosting a 7 September 2011 article by Kevin
Williamson of BelaCaledonia:

If you continue to publish the article on your blog then legal proceedings
will follow on the basis that you are repeating the libel occasioned by bella
Caledonia.

We trust that you will attend to the removal of the article forthwith.

The original offending article is it the Google cache at:
http://tinyurl.com/66hcpgp [Attached downloaded today by Cryptome.]

Briefly, its offence is to name former Acting Chief Constable … …… of
Lothian & Borders Police as “Golfer”, the anonymous police source who alleges
Fabrication of evidence by the CIA during the investigation of the Lockerbie
disaster. Text-only version.


The current page could have changed in the meantime. Learn more.

POLICING LOCKERBIE: A BELLA CALEDONIA EXCLUSIVE
What follows below is a special Bella Caledonia investigation by Co-Editor Kevin
Williamson into one of the most tightly-guarded secrets surrounding the
investigation into the conviction of Abdelbaset Ali Al Megarahi for the Lockerbie
bombing.

It has been known for a number of years that a police officer – known only by the
codename GOLFER – made a signed statement to the Scottish Criminal Cases Review
Commission in which he testified that the fragment of timer which was used to
convict Al Megrahi was planted by CIA operatives with the collusion of Scottish police officers who were supposed to be investigating the terrorist atrocity.

GOLFER has become one of the most important witnesses in the campaign to clear Al Megrahi. GOLFER is the only known police eyewitness who has come forward and testified that serious crimes were committed by the investigating officers to frame Al Megrahi.
Until now the identity of GOLFER has been a fiercely guarded secret. Given that a redacted and effectively censored version of the SCCRC report is about to be released into the public domain by the Scottish Government we believe it is in the public interest to reveal the identity of the now retired police officer known as GOLFER.

Contrary to the impression given by the SCCRC media release of June 2007 – where it was stated that GOLFER was a “former detective sergeant” – Kevin Williamson’s investigations reveal GOLFER to have been Deputy Chief Constable of Lothian & Borders AS RECENTLY AS 2009. This is his story.


THE RISE AND FALL OF A SCOTTISH POLICE CHIEF
… ….. was a tough no-nonsense police officer, a proven CID man who got results. In March 2005, after serving 26 years in the force, he finally joined the big league and was appointed Assistant Chief Constable of Lothian & Borders Police (L&B). Before that he had been Divisional Commander of North Glasgow and East Dumbartonshire Police.

L&B were delighted they got their man. Chief Constable Paddy Tompkins gave him a warm welcome in the local press:
independence – self-determination
– autonomy
Policing Lockerbie, A Bella Caledonia Special Investigation.


Dr Swire believes there is evidence yet to be released that will prove Megrahi’s innocence. He said: “I met him for the last time face-to-face in Tripoli in December last year, when he was very sick and in a lot of pain.

“But he still wanted to talk to me about how information which he and his defence team have accumulated could be passed to me after his death.

“I think that’s a fairly amazing thing for a man who knows he’s dying to do.”

Pamela Dix lost her brother Peter, 35, in the bombing and now fears she will never know what really happened.

Ms Dix, 54, said: “It closes the door. Megrahi dies a convicted man and our key to finding out what happened is gone and we will never have the opportunity to hear from him now.”

Earlier this year, an authorised biography of Megrahi by John Ashton claimed the Libyan was innocent.

Its central claim – that Megrahi was indirectly pressured by Mr MacAskill to drop an appeal in order to pave the way for his repatriation to Libya – was branded “hearsay” by the SNP.


Scotland’s Being Readied For Occupation By NATO

His son is on the record, as saying that they did not accept the blame, but wanted the UN sanctions lifted. It has cost them $40 bn in lost oil sales and it was more economical to pay out.

I did a fair bit of research with links to back it up some years ago.


TAP – It makes you wonder if Al Megarahi was murdered, using the cancer method.  He was highly inconvenient alive.