War between Iran and Israel and the US has been predicted so many times, it’s hard to recall how many. The Straits Of Hormuz are thought to be the best place to get a war started by the global elites who want to call down military mayhem onto China and Russia, who are allied with Iran. Yet despite all provocation, Iran has managed to stop a war from breaking out, so far.

That said, maybe there are going to be places in the world where warfare can be more easily triggered. Obama has decided to run increasing numbers of military exercises within the sensitive zones in the South China Sea, where China, Vietnam and the Philippines all have claims to areas rich in undersea oil and gas. If Middle Easterners are wising up to the globalists’ games, and the ruses they use to get wars going, maybe the Asians will prove better material for falling for them.

I am in the Philippines, where the government is compliant with US government demands, and where the people tends to believe what they read in their newspapers. Any headline accusing China of being the aggressor in territorial disputes is instantly believed (Why not? No one tells the other side of the story), and the people readily support the sending of boats and military hardware to put pressure on the Chinese attempts to hang on to what they also feel is rightly theirs. (Chinese media is no better) 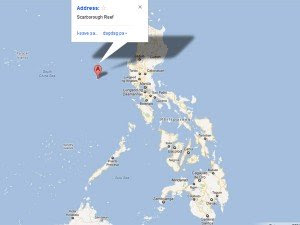 Scarborough reef, where the trouble is. Filipinos are outraged at the incursion into what they believe to be their territory. It’s all very close to where we are sitting in Manila.
The effect could be that the globalists find they can tip asia into warfare much more easily than they have yet found themselves capable of in the Middle east, despite several attempts. This article from global research sums it up. Could the Philippines be used as the fall guys to trigger WW3?
http://globalresearch.ca/index.php?context=va&aid=30550
Joint US-Philippine military exercises are currently underway that can only heighten tensions with China over disputed territorial claims in the South China Sea and in the Indo-Pacific region more broadly.

Yesterday, 4,500 US Marines and 2,500 Philippine troops staged an amphibious landing drill at Ulugan Bay on Palawan Island to simulate the recapture of an island from “militants.” Despite denials by American and Philippine officials, the exercise was pointedly aimed at China, which contests the sovereignty of waters and islands in the South China Sea, including the Spratly Islands, adjacent to Palawan Island.

The South China Sea is rich in gas and oil reserves, leading to disputes over energy exploration and drilling in its waters. Last weekend, US and Philippine special forces troops took part in a simulated assault to retake an offshore oil rig from “militants” off northern Palawan.

The drills are part of annual US-Philippine Balikatan (shoulder-to-shoulder) military exercises, which began last week and are due to conclude today. The confrontational character of the exercise is underlined not only by their location and type, but also by the involvement of troops from Australia, Japan, South Korea, Indonesia and Malaysia.

President Barack Obama declared last November that the US would focus on the Indo-Pacific region as its top strategic priority, announcing the greater use of military bases in northern Australia, including the stationing of US Marines near Darwin. Since mid-2009, the Obama administration has been engaged in an aggressive drive to strengthen alliances and strategic partnerships with countries throughout Asia in a bid to undermine Chinese influence.

US Secretary of State Hillary Clinton asserted at an Association of South East Asian Nations (ASEAN) summit in 2010 that the US had “a national interest” in ensuring “freedom of navigation” in the South China Sea. Clinton’s comments signalled US backing for ASEAN nations to more vigorously press their territorial claims against China, and have resulted in the Philippines, in particular, taking a more aggressive stance.

The Balikatan exercises took place amid an ongoing standoff between Philippine and Chinese vessels at the disputed Scarborough Shoal to the west of the Philippine island of Luzon. Earlier this month, the Philippine military dispatched its largest vessel—a re-fitted, former US Coast Guard frigate handed over last December—to confront Chinese maritime surveillance ships that were preventing the Philippine navy from detaining Chinese fishing boats. While the standoff has eased, both countries are maintaining ships in the area.

In a TV interview on Monday, Philippine Foreign Minister Albert del Rosario appealed for other countries for support. “I think the current standoff is a manifestation of a larger threat to many nations. The bigger picture is that anybody can be targeted,” he warned.

Del Rosario and Philippine Defence Secretary Voltaire Gazmin are due to hold talks next week in Washington with Clinton and US Defence Secretary Leon Panetta before a meeting between the US and Philippine presidents. President Benigno Aquino is expected to ask Obama for greater military assistance, and also offer a basing arrangement for US forces, possibly on Palawan Island.

Philippine military chief General Jesse Dellosa recently appealed for US backing, declaring: “We need more naval and air assets to protect our territory. The whole world knows that China has myriad more ships and aircraft than the Philippines.” The US has already announced plans to hand over a second refurbished Coast Guard cutter to the Philippine navy.

Comments earlier this week by Lieutenant General Duane Thiessen, the US commander of Marines in the Pacific, demonstrate the dangers of the Obama administration’s reckless policies. Asked if the US would come to the aid of the Philippines in the event of a military confrontation with China, he declared: “The United States and the Philippines have a mutual defence treaty which guarantees that we get involved in each other’s defence and that is self-explanatory.”

In other words, having encouraged the Aquino administration to toughen its stance, the US is committed to backing the Philippines in a war with China, even if it is triggered by an incident not of its choosing, such as the standoff over the Scarborough Shoal.

The US-Philippine exercises were held as the US was engaged in an annual “naval exchange” with Vietnam, which also has competing claims with China in the South China Sea. The exercise, which began on Monday, was larger than in 2011 and involved three American warships, including a guided missile destroyer, and 1,400 personnel. While not as cosy as the US-Philippine military ties, relations between the US and Vietnam have grown closer since 1985, despite the bitter legacy of American imperialism’s war on Vietnam.

Amid the confrontation over the Scarborough Shoal, the Balikatan exercises have provoked warnings from China. A commentary in the Liberation Army Daily, the mouthpiece of the Chinese military, declared: “Anyone with clear eyes saw long ago that behind these drills is reflected a mentality that will lead the South China Sea issue down a fork in the road towards military confrontation and resolution through armed force… Through this kind of meddling and intervention, the United States will only stir up the entire South China Sea situation towards increasing chaos, and this will inevitably have a massive impact on regional peace and stability.”

TAP I hear Filipino friends angrily supporting the sending of ships to remove Chinese fishing boats from around Scarborough shoal. They don’t realize they are likely being set up as the fall guys by the globalists to get their war started. Hold back, lads. Take another look at this. Is war really what we all want? In this day and age where weapons can incinerate us all in the first day? Simple people can be easily made to bring a little bit of aggression into a sensitive situation. If the people at the very top, the globalists, the internationalists, they can orchestrate both sides to start the fighting they hope to profit from. Don’t buy it, is my advice. Act cool. Don’t rise to their bait. Let WW3 get started somewhere else. You survive best by keeping heads down, and not believing all they say in government and the media. Chinese claims are nothing new. Philippine aggression in response is.

For a local writer who knows many details about the dispute with China, see ‘why get so riled up over some rocks in the sea?’.

4 Responses to “Will The Philippines Be Used To Trigger WW3?”