YEP! that’s right, Everything I told you last year has been Validated, that was an Excellent Video Tap, well searched. I haven’t seen that one before, It shows some people are thinking about who is SCREWING UP OUR WORLD.

SMOMS are Very Influential People who can move freely across Any Countries Borders without Formal Identification,but the highest is THE ORDER of St GREGORY, which they failed to mention. 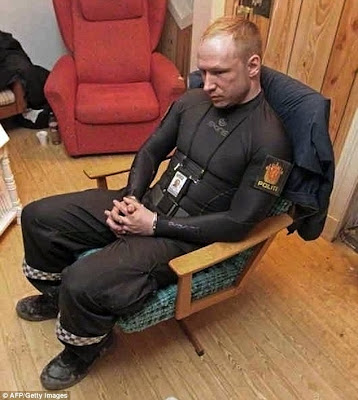 The Guy who killed 77 people ( Probably MK’ed & was a SLEEPER) in Norway was a “SMOM”, many ill informed reporters at the time said he was in Fancy Dress, neglecting the Significance of the Published Image. But I think The DM got it Correct though.

Now it’s ‘Room Service, his own Suite and Japanese Meditation‘.

He obviously pleased someone!

If You Believe The Official Story You Are ‘Brain Dead’, Stop watching Reality TV Programmes. There is Nothing Mickey Mouse about the Gear he was issued with, it wouldn’t be out of place in any Special Forces Organisation, Would It?

One Further point, you remember the the Grenadier Guards Major portrayed by Michael Cain in A BRIDGE TOO FAR, relating to OPERATION MARKET GARDEN, do you know who that Major was? I will tell you, it was Major Peter Alexander Rupert Smith, of The Smith family – an almost publicly unknown dynasty of bankers that dates back 350 years. It was in the 1650’s when Thomas Smith founded Samuel Smith & Co, Bankers in Nottingham, which is believed to have been the first English bank headquartered outside of London. Successive generations of Smiths ensured that the family business flourished and by 1902 a total of ten branches were operating, but more interseting than that you probably know him to be The Lord Carrington, yet another SMOM.

the Queen Mothers favourable attitude to the “pro-peace movement” spoke of her “desire to avert war with Germany and for closer ties to be established between the two countries. The Queen would have willingly accepted a German occupation providing that the monarchy and her place in it remained intact. Her brother, David Bowes-Lyon, to whom she was exceptionally close was, before the war, a director of Lazard Brothers bankers and who also held an “important but vaguely defined role in SOE.

The Lazard’s connection is significant inasmuch as this bank was a link to pro-Nazi Sir Henri Deterding of Royal Dutch Shell and Viscount Bearsted of Hill Samuel, both of whom connect to Baron Kurt von Schroder – a hard core Nazi, a financier of SS chief Heinrich Himmler and a leading member of the “circle of friends of the Reichsfuhrer.” Von Schroder coincidentally employed Allen Dulles as his American attorney
He was also a director of Lazard Brothers and a member of the Anglo-German Fellowship, which was founded in 1935 by German banker Ernest Tennant – a close friend of Hitler’s Foreign Minister, Joachim von Ribbentrop – and had numerous members who admired Hitler. Some, went even further. This is only The Tip of The Iceberg.

How Many of The Reality TV Watchers would know a fraction of this, or even think it concerned them ?

REGARDS ………… WASP
Regret comments are on monitor due to vermin attack on last post.

One Response to “WASP: Anders Breivik Was a SMOM”