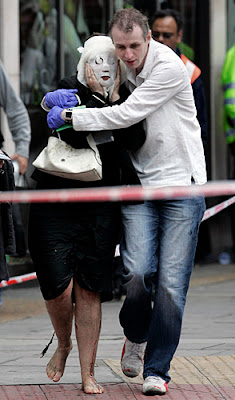 It’s not that long since our last false flag, the London Tube Bombings 7/7 2005. Why don’t people realize these attacks are all organized by MI6 in cooperation with Mossad and the CIA?

April 05, 2012 “This is London” — US intelligence chiefs refused to pass to Britain full details of a “Mumbai-style” terrorist plot targeting London because of concerns that secret sources could be exposed in our courts. (Information Clearing House)

TAP – more likely they are planning another false flag attack on London. As we know from 911, internal security agencies start running slowly to ensure that attacks are not accidentally prevented by an over-zealous internal security network. Information mysteriously isn’t passed to the terror-prevention agencies in time. Here we go again.

Further evidence of something fishy going on is the ongoing cover-up of the causes and circumstances of the death of MI6 spy Gareth Williams. It was known he was listening to endless tapes of conversations at home, overheard by neighbours. What was he investigating?

His family believes he was killed by another MI6 agent, as headlined by the Daily Mail on Saturday March 31st 2012. The killing was clearly authorized, as the flat was swept. No DNA or fingerprints were discovered anywhere. It took the authorities six days before they announced Gareth was dead, and the door was removed from its hinges so no break-in evidence was apparent either.

If spies are being killed to cover information, you have to ask what information they might have stumbled across, that required them to be killed. A false flag attack on London? It’s possible when added to the fact that US Intelligence is refusing to pass over vital information indicating that another false flag is planned.