There was a city so large and famous in the ancient world that at one time it had a thriving population of over 450,000. For over 1200 years it was the center of the world for learning, craft, metalwork, language, philosophy and religion.

No, this city was not Rome. It was a city that existed at its zenith more than two and a half thousand years before Rome. Its founding kings (patriarchs), being Ab-ra-mu (Abraham), E-sa-um (Esau), Ish-ma-ilu (Ishmael), Is-ra-ilu (Israel), Sa-‘u-lum (Saul) and Da-‘u’dum (David).

The city was not Jerusalem, but a name no one today has ever heard of. It was called Ebla. Located in northern Syria, it was the birthplace of Eblaite, the mother tongue that spawned dozens of languages including Aramaic, Arabic and Hebrew.

The fact that you have possibly never heard of one of the most famous cities of history, more famous and influential than Rome ever was, is not surprising. Modern Western history is written to keep such facts hidden, not revealed. It does not benefit the prevailing powers to teach people such facts. Thus history remains open to be bent to the whim of those in power.

This from the introduction to the history page at www.ucadia.org 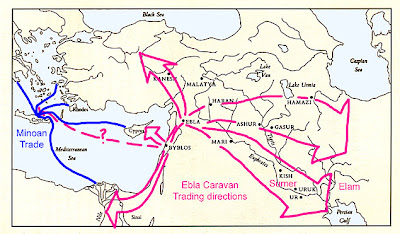 Ebla. This City dominated the western world 2500 years before Rome!!! At school it was never mentioned once. WTF is going on? Why don’t they want us to know our true history? No doubt because they only want history that supports the histories of the main religions that are used to subjugate our minds. Here’s a Korean history of Ebla. It looks like ancient Egypt was one of their colonies. So much for the pharoahs. They were mere satraps, or colonies. Use translate key.

Or, as anonymous commenter suggests, go to wikipedia. If you trust it to be truthful.

I know it makes no difference to the story but we were educated the traditional way when I was young – classics from the age of seven upwards, with corporal punishment on offer if you failed at your Latin verbs. I then went to what was at the time, the most expensive private school in England, and passed into a top Oxford College to read Greats (aged just 17). Not once did any of the supposed geniuses who taught mention Ebla or anything prior to Classical Athens. That’s all we were allowed to know. I always thought it odd that absolutely nothing preceeded this period. No we know that this assumption was entirely wrong. So much for the high cost of being ‘educated’ i.e. told a whole lot of rubbish by conceited ‘dons’, so called. It’s outright deception, not education. No wonder they needed sticks to beat it nto us. It was all bollocks anyway!

5 Responses to “The City We’ve Never Heard Of. And Why Not?”