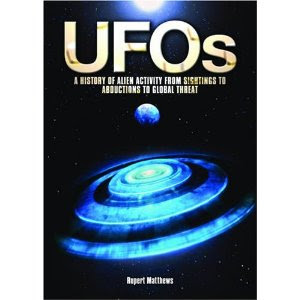 UFOs: A History of Alien Activity from Sightings to Abductions to Global Threat

Rupert Matthews is the MEP candidate who was lining up to replace Roger Helmer as one of the Conservative MEPs for the East Midlands, yet his candidature was blocked by David Cameron. This unwarranted intervention caused R.H. to postpone his retirement as an MEP, and quit the Conservatives for UKIP. Quite an explosion all told.

Well is Rupert Matthews again, writing a new book about UFOs. You have to admit. There aren’t many prospective MEPs who dare to tread on this area of government secrecy. That’s no doubt partly why he’s not wanted at Conservative HQ. He’s got an independent view of the world. It makes you wonder, though. Would UKIP welcome a UFO-aware candidate in their ranks either? 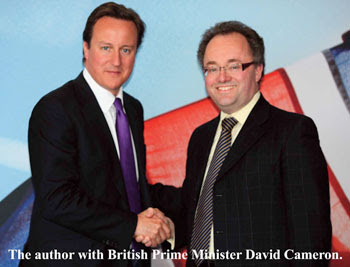 Cameron with Matthews when Cameron was still pretending he’d be a eurosceptic. That particular deception, in 2012, is well and truly over.

In fact, when will UKIP brave their way into non-mainstream topics, like chemtrails, for example. There must be mileage in attacking the One World Government, and not just the EU, which, in any case, is disintegrating economically and can’t be the bogeyman endlessly. What about NATO and all its wars, false flag terrorism, fluoride in drinking water, UFO secrecy, global warming, the United Nations, Codex Alimentarius, Agenda 21, HAARP, earthquake and weather attacks, solar radiation threats and so on?

Lord Monckton was doing great attacking the world government plan to enslave the world, debunking global warming scares. He joned UKIP, and disappeared without media trace. There’s your answer really. The media drops anyone in politics who wants the truth told. It’s only possible to do politics by maintaining the control grid of lies, while people are still dumb enough to buy newspapers and watch TV.

Rupert Matthews will be worth following though, if he makes it to the Euro Parliament in whatever colours. He’ll tackle all kinds of topics where other authors and politicians fear to tread. Won’t you, Rupert?

Rupert has written over 170 books, appearing on television and radio as a presenter and consultant. These have mostly been on history or military subjects, though in recent years he has been writing about ghosts, cryptozoology, UFOs and other paranormal subjects.

Rupert twitters under the name of “rupertmatthews” and has a page on FaceBook as “Rupert Matthews”.

Rupert was born in Dorking, England, in 1961 and was educated at his local Church of England junior school, then at his local grammar school. He later took up a career in publishing as an editor and writer. He went freelance in 1988 and since then has worked mostly as a writer, columnist and tv presenter. Rupert has established himself as a leading speaker to lunches and dinners, speaking on subjects as varied as RAF Bomber Command at War; Your Local Ghosts; How Medieval women led society; How the publishing industry works; The Arrowstorm; The Yeti is real!; The real King Arthur; and the biography of Father Christmas.

He now lives in Surrey, England, with his wife and daughter. Here he is –

And here is another UK politician talking about being an alien abductee as a child, Simon Parkes., from coomments.