Hi Tap, sometime ago someone was asking about HAARP, I gave one of the references, Angels Don’t Play This HAARP, by Nick Begich, but didn’t have a read-online Link handy. 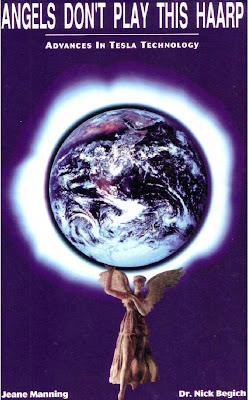 Here is a Resend of the HAARP Read-onLine

READ on LINE it won’t copy,

Dr. Nick Begich is the eldest son of the late United States Congressman from
Alaska, Nick Begich Sr., and political activist Pegge Begich. He is well known in Alaska for his own political activities. He was twice elected President of both the Alaska Federation of Teachers and the Anchorage Council of Education. He has been pursuing independent research in the sciences and politics for most of his adult life. Begich received his doctorate in
traditional medicine from The Open International University for Complementary Medicines in November, 1994.

HAARP – The High Frequency Active Auroral Research Program is a joint project of the United States Air Force and Navy, based in Alaska. a research program designed to study the ionosphere in order to develop new weapons technology.

The HAARP system is designed to manipulate the ionosphere, a layer which begins about thirty miles above the earth. The transmitter or HAARP device on theground is a phased array antenna system – a large field of antennas designed to work together in focusing radio-frequency energy for manipulating the ionosphere. The radio frequency energy can be pulsed, shaped, and altered in ways never possible with other transmitters or at the power levels of this new facility.

The device will have an effective-radiated-power of 1 billion watts when completed in the first phase of the project. It will be used for “earth penetrating tomography” (looking through layers of the earth to locate underground facilities or minerals), communications with submarines, to manipulate communication of others, over-the-horizon radar, energy transfers from one part of the world to another,creating artificial plasma (energy) layers or patches in the ionosphere, to alter weather and may be used as an anti-satellite weapon. The story of HAARP and it’s related technology is a part of the puzzle of a “Revolution in Military Affairs” being pursued by the United States government, but it is only a small part.

“Millions of dollars have gone to Alaska universities to harness the power of the aurora borealis, the electrical energy shimmering in the northern skies… The earmarks also financed, among other things, ‘a supercomputer north of the Arctic Circle’ without naming the University of Alaska. Fairbanks as the beneficiary.”23Early on in the HAARP project there was confusion about “harnessing the energy of the aurora” (the northern lights) for use by the military. The real use appears to be for over -the- horizon effects, communications and ABM defense-related research. The University of Alaska again is the recipient of a supercomputer for “academic”research. The reality once again is that the University is being used to conduct military experiments for advanced weapon systems without full public disclosure or debate.

Well Worth Reading if you have the Time.