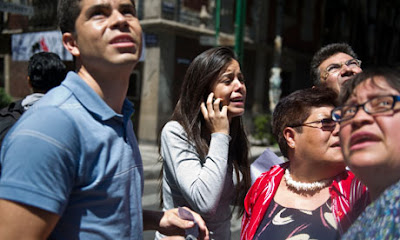 This admission is off the charts strange. Here the governor of the Mexican region stages a “megaquake drill” that announces “we’re ready” and 6 minutes later the quake happens. Are you kidding me?

The Mexican State of Chiapas held a ‘mega earthquake drill’ just minutes before the 7.8 Richter scale earthquake registered in Southern Mexico, according to the news website ADNPolitico.com. Governor Juan Sabines Guerrero sent a message from his Twitter account just six minutes before the actual earthquake. The translation of the message is the following:

“We’re at the State of Chiapas Civil Protection Center. Everything is ready for the 7.9 Richter scale earthquake simulation.”

Six minutes later, and about 500 kilometers west of Chiapas, in the neighboring southern state of Guerrero, a 7.8 magnitude earthquake was registered. The earthquake was so massive that over a hundred aftershocks were felt throughout the following day.

The government has openly admitted the existence of weather modification technology for a long time. There’s even a United Nations Weather Warfare Treaty to NOT use them! Of course only on other countries. You can use them on your own. And as is usually the case, this stuff’s been in full operation covertly yet in plain site for decades and we’re left to piece the evidence together for ourselves. But believe me, it’s not hard. There is documentation all over the place as well as scientific sites that track these phenomena.

Nicolas West from Activist Post summarizes this regarding the recent tornado outbreak nicely:

It is indisputable that weather weapons have been considered as a means for agricultural and societal control. Elite grand master, Zbigniew Brzezinski, stated in his book Between Two Ages (1970) that “Technology of weather modification could be employed to produce prolonged periods of drought or storm.” (Source) Moreover, it is a stated military goal to “Own the Weather by 2025.“

(TAP – The UK is seeing just such a period of prolonged drought, and this enables the chemtrails to drift to the ground undisturbed by clouds or winds. The two weapons are used in combination to achieve maximum kill.)

This HAARP facility and its substations scattered throughout the U.S. have been tracked by intrepid weather researcher Dutchsinse who has made some startlingly accurate predictions based on the tell-tale radar flares of these facilities, already linked to earthquakes in the area of the New Madrid seismic zone.

Beyond earthquakes, however, there is an increasing body of evidence to suggest that the injection of frequencies into storm systems can prolong, or intensify their output. The massive system that moved through the Dallas area yesterday seems to bear the signatures of a similar frequency injection that Dutchsinse has used to predict previous tornado outbreaks. The patterns show up as HAARP rings (circle sweeps) or scalar squares (square waves) which are pinpointed below.

All links to be found in the original post.