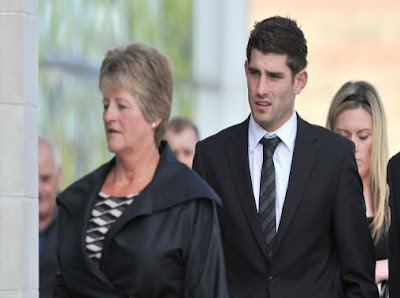 Gary Speed dies in as yet unexplained circumstances. Then new coach, Raymond Verheijen resigns saying he’s sick of the politics and ‘the destructive games’, calling it’a very sad day’. Now the players are being targeted. One way or another, Welsh football is not going to be allowed to rise to the heights.

The woman must have known what she was doing. So must the judge. There is no way Ched Evans should be sent down for five years for what was clearly and undeniably consensual sex. The law is unto itself. Injustice is being seen to be done.

Footballer Ched Evans has been jailed for five years for raping a 19-year-old woman, while another player, Clayton McDonald, has been cleared.

Wales and Sheffield United striker Evans, 23, was convicted by a jury at Caernarfon Crown Court.

Both he and Port Vale defender Mr McDonald, also 23, had denied rape at a Premier Inn near Rhyl, Denbighshire.

The men admitted having sex with the woman on 30 May 2011, but said it was consensual.

Court proceedings were disrupted after Mr McDonald was acquitted, prompting a brief adjournment.

Mr McDonald, of Crewe, Cheshire, looked elated when his not guilty verdict was delivered, and family and friends shouted: “Yes, yes”.

Mr McDonald remained in the dock with Evans, 23, of Penistone, South Yorkshire, who held his head in his hands and cried.

When the judge returned to the court, the jury foreman gave the guilty verdict against Evans.

The Sheffield United centre forward threw the headphones he was using to follow the trial on the floor and then looked shocked.

In sentencing him to five years in prison the judge said: “The complainant was 19 years of age and was extremely intoxicated.

Defender Clayton McDonald signed for Port Vale last season
“CCTV footage shows, in my view, the extent of her intoxication when she stumbled into your friend.

“As the jury have found, she was in no condition to have sexual intercourse.

“When you arrived at the hotel, you must have realised that.”

He told Evans that he might have been used to receiving attention from women in the past due to his success as a footballer, but this case was “very different”.

The judge said the sentence took into account that there had been no force involved and the complainant received no injuries.

He also said the complainant was not “targeted” and the attack had not been “premeditated”.

“You have thrown away the successful career in which you were involved,” he told Evans before sending him down.

NO! Mr judge, you’ve destroyed the career of an innocent man, making this the third inexplicable event in six months destroying Wales’ chances of becoming a world footballing giant. All complete coincidence of course.

And it’s not only the court decisions that are biased according to this website.