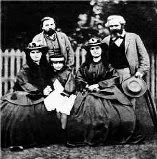 The Family From Hell. Karl Marx’s daughters both committed suicide. And his son-in-law.

Here’s a good one. Marx and Satan.
Re Marx family pic – two of Karl Marx’s daughters and one son-in-law
committed suicide.

Marx and Satan by Richard Wurmbrand 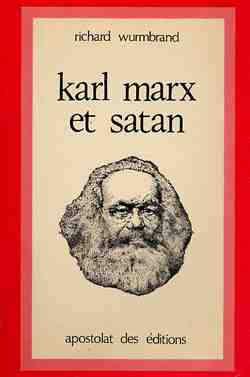 Richard Wurmbrand (March 24, 1909 – February 17, 2001) was a Romanian Christian minister of Jewish descent. He was a youth during a time of anti-Semitic activity in Romania, but it was later, after becoming a believer in Jesus Christ as Messiah, and daring to publicly say that Communism and Christianity were not compatible, that he was imprisoned for his Christian faith. He served 14 years in Romanian prisons and was tortured in the most horrible ways.

He wrote more than 18 books, the most widely known being Tortured for Christ. Various of his works have been translated into more than 60 languages. He founded the international organization Voice of the Martyrs, which continues to aid Christians around the world who are
persecuted for their faith.

Marx and Satan can be downloaded, from the internet, as a PDF file.

(I realise that reading a book in the form of a PDF file is laborious,
but this book is only 79 pages long and is well worth the effort !)

Extracts from Introduction by Richard Wurmbrand:

The Communists certainly took note of this book, which has been translated into Russian, Chinese, Romanian, German, Slovak, and other languages, and was smuggled into Iron Curtain countries in great quantities. For instance, the East Berlin journal Deutsche Lehrerzeitung, under the heading “The Killer of Marx,” denounced my book vehemently, calling it “the most broadly based, provocative, and heinous work written against Marx.”

Marxism is the great fact of modern life. Whatever your opinion of it, whether or not you believe in the existence of Satan, whatever importance you attach to the cult of Satan practiced in certain circles, I ask you to consider, weigh, and judge the documentation I present here.

Then I will be able to walk triumphantly,
Like a god, through the ruins of their kingdom.
Every word of mine is fire and action.
My breast is equal to that of the Creator.

Thus heaven I’ve forfeited,
I know it full well.
My soul, once true to God,
Is chosen for hell.

(from “The Pale Maiden“)

Marx dreamt about ruining the world created by God. He said in another poem:

Then I will be able to walk triumphantly,
Like a god, through the rains of their kingdom.
Every word of mine is fire and action.
My breast is equal to that of the Creator.

Regarding the play Oulanem, a play written by Marx, Wurmbrand writes:

“Oulanem” is an inversion of a holy name. It is an anagram of Emmanuel, a Biblical name of Jesus which means in Hebrew “God with us.” Such inversions of names are considered effective in black magic. We will be able to understand the drama Oulanem only in the light of a strange
confession that Marx made in a poem called “The Player,” later downplayed by both himself and his followers:

The hellish vapours rise and fill the brain,
Till I go mad and my heart is utterly changed.
See this sword?
The prince of darkness
Sold it to me.
For me he beats the time and gives the signs.
Ever more boldly I play the dance of death.

These lines take on special significance when we learn that in the rites of higher initiation in the Satanist cult an “enchanted” sword which ensures success is sold to the candidate. He pays for it by signing a covenant, with blood taken from his wrists, agreeing that his soul will belong to Satan after death.

If there is something which devours,
I’ll leap within it, though I bring the world to ruins –
The world which bulks between me and the abyss
I will smash to pieces my enduring curses.
I’ll throw my arms around its harsh reality,
Embracing me, the world will dumbly pass away,
And then sink down to utter nothingness,
Perished, with no existence – that would be really living.

(from the play Oulanem by Karl MArx)

What was the specific contribution of Marx to Satan’s plan for mankind?
The Bible teaches that God created man in His own image (Genesis
1:26). Up to the time of Marx, man continued to be considered as “the crown of creation.” Marx was Satan’s chosen tool to make man lose his self-esteem, his conviction that he comes from high places and is meant to return to them. Marxism is the first systematic and
detailed philosophy which drastically reduces the notion of man.

According to Marx, man is primarily a belly which has to be filled and refilled constantly. The prevailing interests of man are economic in nature; he produces in order to satisfy his needs. For this purpose, he enters into social relationships with others. This is the basis of society, what Marx calls the infrastructure. Marriage, love, art, science, religion, philosophy, everything other than the needs of the belly, are all superstructure, determined in the last analysis by the state of the belly.

No wonder Marx praised Darwin’s book The Descent of Man, another masterstroke
which makes men forget their divine origin and divine purpose. Darwin
said that man springs from the animal world.

Man was dethroned by these two. Satan could not dethrone God, so he devalued man.

Man was shown to be the progeny of animals and a mere servant to his intestines.

The following quotation is taken from Marx’s poem On Hegel:

Words I teach all mixed up into a devilish muddle.
Thus, anyone may think just what he chooses to think.

Karl Marx, political philosopher of the post Enlightenment world, the
the root of Comunisim, Socialism, Marxism, which led to revolutions
and millions of deaths, demi-God to many, described his own works
thus:

“…when he was tired of writing his own books, he would describe his
work as ‘this shit‘ “