Intelhub sent in by Joe – 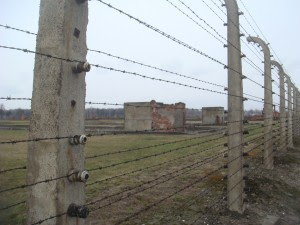 Birkenau fence from WW2. Soon tens of thousands will start disappearing behind barbed wire in new ‘closed hospitality’ centers across Greece. What starts in Greece will no doubt spread across the continent. Greek democracy is in paralysis with the main parties no longer able to win majorities. It’s the same in many countries across the EU where loss of authority has lead to the fracturing of the main parties. That plus blame all your troubles on the influx of desperate foreigners – most of whom are dislodged by NATO’s wars. The descent into barbarism is complete.

As if the current circumstances of austerity-riven Greece were not bad enough already, it seems that the country is set to have a dozen or so concentration camps dotted around the country.
In language that might have been lifted straight from the Nazi lexicon, these establishments will be known as ‘closed-hospitality’ centers.

The incarcerates will be undocumented – meaning unwanted – refugees flooding in from North Africa, particularly the once prosperous and richest country in the Maghreb belt, namely Libya.
Most of the Mediterranean countries are in the thick of the refugee tide, but Greece is so far the only country that plans to compulsorily pen them up.

The first ‘reception center’ is scheduled to open at a former army base near Athens in the next few weeks.
Why the sudden haste, you ask? The answer is simple. A general election is scheduled for May 6th.

All the parties straddling the spectrum from left to right are playing the immigrant card for all its worth, but none more so than the main establishment parties: Pasok (theoretically socialist) and New Democracy (nominally center-right).
Right now their electoral prospects look decidedly dim. New Democracy, led by Antonis Samaris, is barreling on about 22% in the opinion polls, Pasok rates scarcely better at 18 and a smidgeon percent.

The nightmare entertained by the EU-imposed Greek Quisling, Lukas Papademos, is that neither party will end up with sufficient seats to ensure a majority in the Vouli, the national parliament.

As the two principal challengers shed votes by the hour, Greek voters are turning to a plethora of fringe parties rooted in both the left and right.

They may squabble fiercely among themselves but they are united by one core belief: total opposition to the EU/IMF austerity package which has ripped the heart out of the Greek economy.
The indecent haste of the mainstream figurines wildly wind milling the immigrant camps to attract voters’ attentions speaks for itself.

But to catch the flavor, listen to the chillingly titled ‘Civil Protection Minister’ Michalis Chrisohoidis grand-standing for his party, which is Pasok.

“We have a commitment to start operating these closed-hospitality centers, and we will keep to that commitment. The first centre will operate before the general election in greater Athens, and it will act as a model to show Greek citizens that these facilities are safe for the public and will operate to high standards of health and hygiene,” he said.

Am I alone in detecting some singularly inappropriate language here? After all, was it not the Nazis who indulged in ‘health and hygiene’ as a constant reprise, particularly when it came to the ‘closed-hospitality’ camps established for the benefit (and ‘hygiene’) of European Jews? Can we ever forget the horrific deception of the gas chambers as fumigators?

At best, Greek politicians are indulging in cheap populist barrack-room politics.
But what is more disturbing is that the issue of the camps has — temporarily at least — deflected the attention of voters away from the rape and pillage of their own homeland by the globalist smash and grab gang.

This of course is entirely intentional.

Last week an elderly pensioner called Dimitris Christoulas, who declared that he was reduced to scavenging dustbins to stay alive, publicly executed himself in the great national theater called Syntagma (Constitution) Square situated in the heart of Athens. His funeral was practically a state occasion.

The affair ignited once again the flames of fury directed against the organized looting of the country.

In no time at all the promise of a network of ‘closed-hospitality centers’ (lock-ups, all said and done) bolted to the forefront of the election campaign. This could only have happened with a grace and favor nod from Lukas Papademos.

I pause here to remind readers that this same Papademos was the key official on watch at the Greek central bank when the country was hustled into the euro back in 2000. Wall Street banks were busy with the smoke and mirrors to make it appear that the glory that was supposed to be Greece in fact concealed hopeless insolvency.

There is no doubting that Greece is in the forefront of the refugee wave emanating from the Middle East, Pakistan, India and Afghanistan.

The number is unclear because the number of undocumented aliens in the country is largely a guesstimate. However the influx is probably in the region of 130,000 a year, which in such a small country having an ethnic population of just over ten million is bound to promote severe friction.

What the Greek authorities refuse to recognize are the reasons why Athens, the capital, has become Chicago on the Aegean.

The answer is two-fold. First, precisely those western policies which have led to the destabilization and virtual destruction of countries such as Libya, Afghanistan and Iraq, conducted in the so-called name of ‘humanitarian interventions.’

Next comes the power of Greek crime lords responsible for promoting Athens as one of the major crack hubs in Europe, with weapons smuggling and trafficking in human flesh thrown in for good measure. Lately baby snatching has been added as a new specialty.

How about this for sheer humbug, flying in the face of everything that is known about crime in Greece: “On the basis of arrests and investigations we believe that up to 70% of violent crime is perpetrated by foreigners and I say this without wishing to demonize migrants,” said police spokesman Thanassis Kouklakis.

I should add that the Greek national gendarmerie and municipal police forces are routinely racialist. The quote simply confirms our knowledge on that score.

The uncomfortable truth is that Pasok, which is essentially a vehicle for the long-ruling Papandreou dynasty, was largely responsible for promoting the power of the Greek mafia in the first place.

Andreas Papandreou, the choleric tortoise-like Pasok godhead who ruled Greece as a virtual dictator throughout the 1980’s, let the black genie out of the bottle. It was he who pursued the ‘anything goes’ policy with the Greek mafia in return for their acting as the praetorian guard of his crooked administrations. There is strong evidence that he was using mafia sharpshooters masquerading as Marxist urban terrorists to settle scores with his enemies.

Once they arrive in this prosperous junction of criminal networks, risking their lives in long overland treks and risky boats, the average new recruit may soon earn as much as ten thousand Euros a year from the rich harvest of pickings. All but the small change is siphoned off by pimps and gang leaders plus the ‘landlords’ who sub-let semi-derelict properties bunched together in the downtown slum area of the capital – within sight of the Parthenon.

Stone-faced Greek officials maintain the pretense that unwanted guests arriving in droves are almost entirely responsible for the wave of crime sweeping the capital.
This of course is nonsense, since they are absent the skills, resources or contacts. In fact as the daily Ethnos correctly reported, the powerful crime syndicates are all Greek, plus a lacing of Albanians, Syrians and Egyptians.

The center of Athens is virtually a no-go zone for law enforcement, thanks to another uncomfortable truth. This is the notoriously lethargic tendencies of Greek policemen when it comes to salary enhancements proffered by the local crime barons.

Further investments, offered in the same time-honored Greek fashion, make sure that awkward public officials steer well clear of the lucrative activities pursued under their noses. As any Greek will tell you corruption and bribery is endemic in the civil service.

In the past few days the tragic story of Humayun Anwar (18) and Wakar Ahmed (33) provides an insight to the life of immigrants who pay human smugglers up to seven thousand Euros apiece to get to Greece.

The pair fled the poverty and desperation of the Indian Punjab, only to find themselves trapped as virtual slave laborers, forced to work ten hour shifts, seven days a week, for 25 Euros a day.

Both were horrifically killed as they struggled to save an elderly Greek couple whose car tumbled into the path of an approaching Athens-Thessaloniki express train.
It is the fate of Greeks to have been ruled by ruthless self-serving demagogues in one shape or another since gaining independence from the Ottoman Empire in 1832.

The latest episode of EU-imposed direct rule is just another example of lordly misgovernance forced down the throats of the Greek people. The immigration issue has now risen to the fore solely to drown out the destruction of the country typified by the martyrdom of Dimitris Christoulas.

It was left to Petros Konstantinou of the Greek Campaign Against Racialism to sound the clarion call of reason – and commonsense. “It’s not the migrants who are responsible for rising crime, but policies that Greece is being forced to take by the EU and IMF that are spreading poverty, unemployment and misery.”

What we detect is the rank smell of hypocrisy in the run up to the general election at which time Greeks are supposed to vote in favor of flaying themselves alive.

Note: if you use these links your purchase will also help support End the Lie by giving us a small commission while also supporting the great work that Richard Cottrell is doing. We would sincerely appreciate if you could shop through us.