I am from Slovakia, eastern Europe. I can confirm the NATO link: the very year we (more exactly our politicians…) joined NATO (2004) the chemtrailing begun. As I know the situation is similar in every “eastern bloc” countries, maybe except Hungary, which is NATO member from 1999 but chemtrailing begun later (maybe because of all its neighbours were not member states). Western Europe is chemtrailed since cca. 2000. Interestingly enough Israel too. It looks, that in this plan there is no “chosen people”.

On the other side of the border, I saw chemtrail (“chimiotrasy”) photos from Russia. It is questionable, if they are the same kind as the NATO-chemtrails. A friend of mine made some videos of the distribution of lightnings (=EM impulses) of the 2010 late spring / summer crazy weather and the image is shocking, look at:

TAP – That’s a brilliant video. Russia being starved of rainfall, and the UK deprived of normal rain pattern. I am sure it will be sent far and wide from here. Notice how weather is being deliberately sectored across Europe from a point in Denmark. This appears to confirm the use of HAARP controlling the weather in combination with a Europe-wide chemtrailing operation. HAARP clears the clouds and winds enabling the chemtrails to descend to their targets.

REST OF COMMENT – The same summer, when we had in Europe floods, Russia burned, and the boundary between these two systems was too sharp to be natural.

Sorry I can not believe in ETs, but Evil is reality (ETs, if they’re real, are also created by the Creator – thus they are neither the main question, nor its answer). The chemtrail phenomenon is created and provided by people. Thus it can be stopped by people. If they are motivated by Evil, the people who stop it must be motivated by Good. Anonymous. TAP – I agree. John Kettler and Camelot are disinformation. The aim of the disinformation is to persuade people that aliens are controlling the grid, not humans. This is a pointer as to what they will be doing next with their false flag attacks, and false news.

TAP –
When I flew from Amsterdam to Manila two weeks I sat on the port side of the aircraft, and carefully observed the sky. The conclusion I came to was that the countries being chemtrailed were NATO members and the countries not being, were not NATO members. It might seem a strange kind of alliance where all the governments decide to poison their own people. But when you think about it, they don’t need large numbers of people to fight wars any more. Drones patrol the skies. Missiles deliver their attacks. Only special forces seem necessary to target the cruise missiles and bombs. The rest of the armies, navies and air forces of yesteryear are obsolete.

NATO has clearly decided that defense will be more effective without people to defend, just land.

This piece from John Kettler confirms that chemtrailing is, as I suspected, a NATO operation. The rest of it is probably pure fantasy, or even worse some kind of disinformation to confuse us all into thinking we are being saved by an extraterrestrial race of beings, from our own governments who want us all dead as soon as can be conveniently arranged. 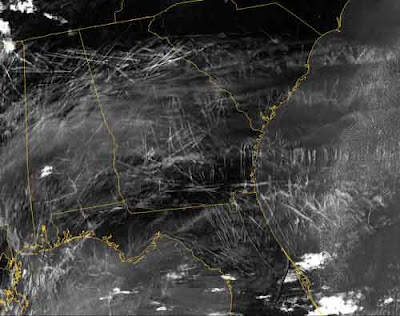 Stop Spraying California releases a NASA picture of Operation Cloverleaf trails over Florida and neighboring states. Lots also dumped over the sea as I noticed as I flew over the Baltic recently.

The NATO operations of death against hundreds of millions of people are called CLOVERLEAF and EVERGREEN. Once we’re all gone, the ground can be covered with greenery and clover leaves. The names are honest enough, but missing out the fact that first millions of otherwise perfectly healthy human beings must die to make way for the clover leaves, seems almost impolite.

Even if this blog post from John Kettler is disinformation of the cruellest kind, it’s nice to read stories of chemtrailing planes being shot down, even if it’s total b/s.

Chemtrails–Proof ETs/EDs ARE Doing Something!
Posted on April 3, 2012 by John Kettler 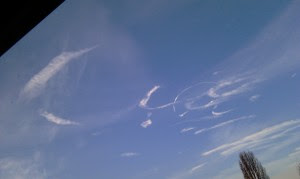 (TAP – those are just turnarounds, John. None fell from the sky.)

Chemtrails–THE hot button for our readers, who are screaming for relief from the chemtrails by the ETs/EDs (extraterrestrials/extradimensionals). Guess what? The ETs/EDs “listened” and ARE responding. They’re attacking both chemtrails & aircraft delivering them.

Last week, one of our members got to see the Liberation Forces at work. An aircraft was chemtrailing, followed by a chemtrail eating spacecraft. Evidently tiring of this toxic diet, the spacecraft proceeded to hit the chemtrail aircraft with a smallish beam weapon, causing the aircraft to trail black smoke and apparently plunge into the San Bernardino National Forest somewhere in the vicinity of Apple Valley, California.

No forest fire occurred, no National Transportation Safety Board crash investigation team was called out, and we’re not even sure the ruined aircraft’s debris made it to the ground or simply disingtegrated. Intelligence sources have so far not been able to verify any such jetliner crash, so the disintegration is a very real possibility, one confirmed by contacts “topside” Wreck or no wreck, great news for all of us getting “death dumped” from above!

I was on my way to the doctor’s office in Apple Valley on March 21, 2012 at approximately 1300 and I saw the chemtrail and then I saw the dark line coming off of it at an angle to the ground. I kept watching thinking it was a shadow, but no matter what angle I watched it from it was there. I drove from the base of the mountains all the way to Apple Valley and it was there the whole way. Now I know what it was.

They do a lot of chemtrails here in the San Bernardino mountains where I live. Some days I can’t even go outside it is so bad….

Just wanted to confirm your story, I saw it too, now I know what it was.

To everyone starved for proof, K.’s confirmation of the chemtrail aircraft shootdown is priceless, but there’s more good news. See that pic at the top? That’s what happens when the ETs/EDs unexpectedly appear! The glowing orb reported below terrified the crews, and the chemtrails show it. This was a year ago, over Europe. Joe Vanderham describes what happened:

I took a picture with my cell phone of the exact same kind of event, except in this case the chemtrail spraying planes were turned around by a single glowing orb like craft, which unfortunately can’t be seen on the picture.

This means the ETs/EDs were combating chemtrails WAY before this blog appeared! A query to Joe got this:

After taking the second picture I spotted the orb in the centre of the cloud formation. It appeared out of nowhere, then it moved about 20 metres straight up and then it disappeared again. I immediately started filming the clouds, hoping the orb would show again, but it didn’t and the cloud formation started to fade. I decided to stop filming and took one last picture (#3).

Chemtrails & “Clouds” That Eat Them

Another private E-mail produced this gem in the campaign by the ETs/EDs against chemtrails:

Wonderful! I have been watching the chemtrails day by day! Sometimes a weird cloud, that I have not seen before, “eats” them. I keep looking for a space craft though! I try to call in the ET/ED’s to clean up the chemtrails.

I live in Brentwood, CA. Not down south but up north near San Francisco.

That sounds awfully familiar. Now, where was that? How about here? Right on page 19 of the writer’s UFOs, Antigravity, Vimanas & Mystics under Secrets of Vimanas: ✦Tapping atmospheric and zero-point energies to put the vimana in a white shroud, hiding it. Isn’t that interesting? Vimanas (ancient Indian aerospace vehicles) hid this way, just like the ETs/EDs hid while eating chemtrails over Brentwood!

(From another private E-mail)

Great news! I’ve noticed lately that the planes spray less frequently and when they do spray the chemtrails they leave behind are small and kind of pathetic as opposed to even three months ago!

Who’s Behind The Chemtrails?

According to the ETs/EDs, chemtrails are, bizarrely, NATO operations, under the code names CLOVERLEAF and EVERGREEN. The second name is coincidence, ineptness or sheer gall, since Evergreen Aviation is a CIA proprietary! These revelations on chemtrails are being checked by sensitive contacts. Meanwhile, public officials, big name environmental groups and most mainstream media resolutely refuse to discuss the chemtrails over their very heads!

TAP – OK John. Let’s get some real information. What was the aircraft shot down? some reference numbers and so on. who died on the plane. their names. It all seems like disinformation to give opponents a channel to direct their opposition. If you’ve got any real evidence let’s have it. Otherwise let’s stop kidding ourselves. This is secret mass murder with none able or willing to stop it.