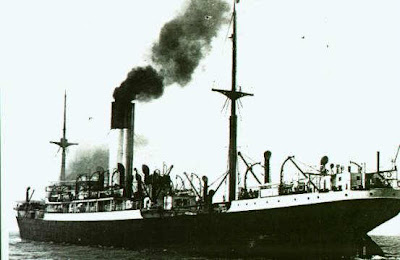 On 11th November 1940 the German Raider Atlantis captured the Blue Funnel vessel Automedon in the Indian Ocean while it was en-route from Liverpool to Singapore. She was boarded, and then searched before being scuttled. The Germans discovered some vital intelligence – British War Cabinet Minutes from August 1940 which detailed British strategy for the defence of SE Asia. The document COS (40)592, was addressed to Brooke-Popham CinC in the Far East.

The most vital piece of information was that Britain would not intervene if Japan were to occupy French Indo-China (Vietnam, Laos & Cambodia today). The German Captain of the Atlantis realised the importance of these papers and sent them to Japan whence they were transmitted to Berlin – Hitler ordered the information shared with the Japanese. It may be argued that knowing the British plans for the Far East encouraged Japanese aggression in the Far East.
__________________

TAP – vital intelligence was steered cleverly into the hands of the Japanese by the British elite, people like Churchill, who wanted an end to the British Empire, to make way for the world government we see breaking out on all sides today.

Churchill has gone down in history as a hero. Think again. He was a key part of the deception that WW2 was, acting out the role of British patriot, secretly all along working to end the Empire and bring in One World Government. He was the son, not of Randolph Churchill, but of Edward vii, and grandson of Queen Victoria, who was the illegitimate daughter of Nathan Mayer Rothschild, whom Churchill resembled facially.

I have studied WW2 all my life. Only in the last year have I started to see what it was really all about – the One World Government, controlling the leaders of the five countries involved, through a combination of deception, and of placing Hitler, Churchill and Stalin into key positions, each one of illegitimate Rothschild descent. They enabled their nations to be smashed, and brought into a one world structure, which has gradually dragged them into its web since WW2.

Follow the money. The nations had to be crushed for World Government to succeed. The Automedon was how Britain’s Eastern Empire was got rid of, and how Japan was embroiled in the war, destined to be smashed by US military power. The Fall of Singapore was a foregone conclusion, and Churchill knew it. He sent two ships to certain destruction, and 250,000 men.

Churchill actually said there was a higher cabal running the war. Destroying every country and bringing them into One World structures was the propose of that cabal.

It was a TWO EDGED SWORD Tap.

The Jesuit Controlled Bankers did what they know Best, ie Finance Both Sides For Maximum Profit, they then Developed The A Bomb,( Ever wonder why it was called the Manhattan Project?), & why we have names like Trinity.

It was paid for by The Jesuit Rockefeller, then as they planned, the Secret Data was leaked to the Russians, (Stalin another Jesuit), by yet another Jesuit Claus Fuchs,

They were then able to stage the Cold War, which is why they had to Balls Up Operation Market Garden, & they had to kill their best General George C Patton.

Did you know that Prince Bernhard was working in the Intelligence Section related to it. They didn’t want the war to end too quickly, Stalin had to get to Berlin First, for the next stage to proceed.

That’s the same Bernhard that Founded the Bilderbergers. I could go on but you know as well as I do The Sheeple haven’t got a Clue, & would prefer to watch Simon Cowells Rubbish

And Guess What. The Late Bernhard Just Happened to be a SMOM.

Now Tell me Jesuits have nothing to do with it!

3 Responses to “The Automedon Tricked Japan Into WW2.”