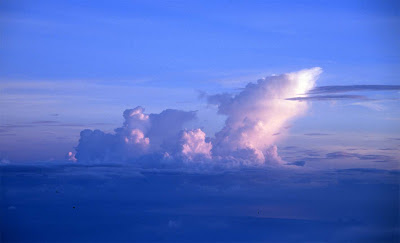 Manila dawn. Nothing much seen so far. Is Cebu the beginning of a philippine national chemtrails campaign?

An anonymous comment says that the first chemtrails in the Philippines have been seen. They were said to be seen on April 29th 2012 over Cebu. I can’t confirm this as I am in Manila. There is only one anonymous source.

Chemtrails were laid over central Cebu all Sunday afternoon, April 29, 2012. The first I’ve seen here. The sunrise this morning painted the fake clouds with rainbow colors. Since this was likely done by US military planes could this be related to the military buildup?

I wondered if I saw a chemtrail yesterday over Manila. I have never seen one before. I couldn’t decide finally if it was a chemtrail or not. It was not like a contrail. It spread like a chemtrail, but as there were clouds there too, I wasn’t 100% sure.

The report from Cebu makes me wonder if what I saw yesterday was a chemtrail in Manila. I will watch out for any more reports. The report from Cebu mentions the military build-up going on over Asia. There is quite a potential here for kicking off a war between the Philippines and China. WW3 could be started here just as easily as in The Gulf.

Philippine TV is full of violent movies, and I mean full. The maids here watch endless movies where guns are fired hour after hour. The culture has been programmed to be one where guns are considered the obvious way to settle a dispute, amongst these otherwise peaceable people. The emotion being stirred up in the media against China for fishing on Scarborough Reef is palpable. Yet China has been there for decades. What is new is the Philippine Government being encouraged to start attacking China for being there by the USA, who are providing naval boats to enable the Philippines to go out and create a dangerous confrontation.

It has been exceptionally hot this month, with little in the way of rain. Normally the heat builds up towering clouds over the sea which deliver torrential rain, which relieves the heat. I wonder if the arrival of chemtrails is being accompanied by a weather modification programme, as well as the push towards war. It would be the norm for all other parts of the world, ruled over by the same elites.
Now then, my Filipino friends. Watch the sky and see if you can spot any chemtrails. If you see any, report them here please. And don’t allow the boiling hot weather, or HAARP brainwave manipulation, to stir you up to fever pitch over the Chinese presence at Scarborough Reef. You’re in play by the elites. Wise up, and keep out of wars. Kick out the Americans if you dare. And keep your skies chemtrail-free.

UPDATE – with no follow up comment, or confirmation, I now believe this to be a hoax! Quite a good one, in a way. I should have asked for some evidence first.

was able to view this satellite page for a short time Monday morning then it went dead. I still can’t connect to it. I wonder if it’s being blocked? It displays an animation of the cloud cover from Guam to the Philippines. http://www.goes.noaa.gov/guam/guamloops/guamir.html
By Anonymous on April 29th 2012. First Chemtrails Arrive In The P… on 5/1/12

I’m the one who reported the Cebu chemtrails. It’s no joke. I’m sure many other people must have seen it. I have lived on Cebu more than six years. I have occasionally seen a jet leave a short contrail that would disappear after a few minutes. But all Sunday afternoon until dusk, I witnessed a jet (or two) leave trails that went across the sky and slowly spread with the wind. The clouds formed were truly not normal clouds of water vapor. It was definitely particulate matter not gaseous vapors. This chemtrail spraying continued all afternoon over Cebu by one or two jet aircraft making passes at least every hour at high altitude. The vectors varied from North to South and from Southeast to Northwest and directions in between. The jet trails crossing appeared to be very high over Mactan Cebu International Airport.

I have never seen chemtrail spraying here in Cebu before Sunday April 29, 2012. The sunrise Monday morning had unusual rainbow colors in the clouds. Seeing the color green in clouds is very unusual. The clouds also had regular patterns like they were vibrated by some force (HAARP). Monday the sky was dirty when lately it has been clear deep blue. Also Monday there was the smell of dust in the air, reminiscent of the smell when you burn the paper liners from cement sacks. Today (Tuesday) the sky is getting back to normal. They must have only sprayed Sunday.

If anyone with half a brain observed the sky Sunday afternoon and the sunrise Monday they would have seen that something was wrong. I’ve never seen clouds like that before. That was not vapor, it was particulate for sure. And the shimmering rainbow colors on the clouds above the sunrise was most unnatural. Maybe this was a government test? Someday the true God will bring an end to these evil schemes that harm his creation.

TAP – Thanks for calling in again with a bit more to go on. That satellite weather map of the Philippines over to Guam is excellent. Why are there so many clouds but none make it over the Philippine land mass? We’re gagging for rain. It’s May 1st, which is normally torrential rain, according to local tradition. Is someone keeping the clouds away from the land? That would fit in with a HAARP/chemtrailing campaign if we are seeing one. LATER – It rained in Manila on May 1st as per tradition. Hurrah!

22 Responses to “April 29th 2012. First Chemtrails Arrive In The Philippines”