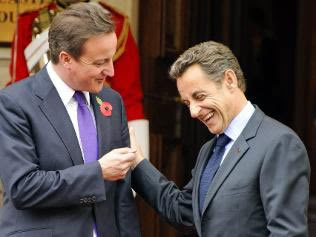 Rothschild-backed military aggressors like David Cameron and Nicholas Sarkozy had better take note. War is no longer permissible to aliens present here on the planet. They could both pay a bitter price for lending support to Israel if she invades Iran, as both are planning to do. France was recently blooded with an orchestrated secret service campaign of terror-killings to stiffen the resolve of the French people into supporting Sarkozy the warrior, and to squeeze him back into office in the forthcoming election.

I asked readers to follow me into intergalactic politics yesterday in the post above featuring the interview of Marshall Vian Summers by Kerry Cassidy of Project Camelot. As expected this has brought the usual comments from those not willing to consider alien influence on earth as a possibility. Notable exceptions are the blog’s stalwarts Me and Wasp, who both commented, partly in favour of my latest preferences.

Today I continue the journey in this new direction by taking a look at John Kettler’s blog, who is, like Marshall Summers, another individual who claims he receives communication directly from sources ‘off-planet’, and who was interviewed by Kerry Cassidy a month or so ago.

It is interesting that Marshall’s clear statement that war is not permitted in our part of the galaxy, is entirely consistent with John’s view that ETs/EDs are blocking the desire of Netanyahu/the Rothschild/Reptilians to bring the Middle east to war between Iran and Israel. Overall John’s view is if a war is started, the ETs/EDs will side with Iran, Russia, China to destroy the aggressors, Isreal and any others foolish enough to lend support like Britain’s David Cameron. (ETs are extra-terrestrials. EDs are extra dimensionals)

Marshall points out that this is not a goodies versus baddies strategy on the part of the ETs/EDs as John appears to suggest on occasions. The ETs/Des have their own agenda to exploit the world, and to subsume us further into their power. This they can do just as effectively by deception and persuasion as by warfare. War makes the procedure of our enslavement less predictable and messy, and destroys the value that the earth represents to alien exploitation, which is no doubt the primary reason that warfare between alien races is forbidden in this part of the galaxy, which Marshall states as being very crowded. Trading agreements override all competitive practices here on earth.

While John’s views and Marshall’s are very different, with John’s being focused on military technology and strategy, and Marshall’s on the political and spiritual choices facing mankind, both are consistent with each other, and with the events that we do know about, including those from alien-sceptics like Gordon Logan, from whom I am expecting a sound telling off at any minute!
Although Gordon should be pleased with much of John Kettler’s views on Israel’s government’s actions, if he doesn’t storm off in disgust.

(BTW Happy Birthday for today to Gordon Logan, his first since his return to the UK from his forced exile, which ended when he began writing publicly on The Tap Blog)

ETs/EDs (extraterrestrials/extradimensionals) have assessed the Middle East situation and see it this way: Israel’s been mobilized for war for ~ three months, following a massive buildup made possible by Sunni Muslim Arab enemies of Shia Muslim Iran. Israeli Prime Minister Benjamin Netanyahu is viewed by the ETs/EDs as the prime cause of Middle East war fever, having declared he wishes to to be the last Prime Minister of Israel, which means he wants Armageddon. In the ETs/EDs‘ view, Netanyahu and his Likudist fanatics must go. Israel has 280 specially modified F-15s , each already loaded with a precision guided bunker buster bomb. The ETs/EDs are aware of this. The Israeli Army is training to a fever pitch, with war expected in the range of less than a week to ~2.5 weeks. It appears the Israelis will strike straight for Iran, bypassing Syria. Indications are the IAF (Israeli Air force) will be using AWACS (Airborne Warning And Control System) type aircraft and droned bomb laden fighters to conduct “back door” kamikaze attacks via circuitous routes.

The Persian Gulf is relatively calm, despite Iranian vitriol about destroying Israel, and oil producing countries are making gobs of money, war tensions having doubled the price of crude. The ETs/EDs view President Mahmoud Ahmedinejad and his Muslim extremist masters as big problems, too, but aver theocratic Iran has never directly attacked a neighbor. Iran’s allies are worried; both Russia & China have been pumping in advanced weapons, to include a recent shipment of Chinese missiles, among which may be nuclear warheads, Israel’s nightmare, despite her nearly 200. A recent remote viewing by a crack team found, prior to this shipment, there wasn’t a single functional nuclear device in Iran. We don’t know whether that’s true now. The ETs/EDs provided some coaching on penetrating dimensional shields around nuclear devices.

Most of the Russian navy is en route, and Russian ballistic missile submarines are in the Atlantic. Putin seems to be feeling his oats, and this force is spoiling for a fight. The ETs/EDs provide a somewhat different perspective. The Russian force is to “spank” Israel/buy time for follow-on forces to demolish the Netanyahu regime–if Israel attacks, say the ETs/EDs. The ETs/EDs say the intent is NOT to destroy Israel, just remove the tumor, as it were.

The ETs/EDs perceive the U.S as having exactly one dependable ally in the region: Israel, and have repeatedly warned of the untrustworthiness of Turkey. The problem is that Israel’s determined to go to war, President Barrack Obama is NOT perceived, by the ETs/EDs or us, as being able (or willing), to stop Israel, but the U.S. military is bone tired and fed up with being pawns to make the rich richer. The ETs/EDs believe the U.S should join Russia & China diplomatically to “arm twist” Israel into compliance.

Failing that, both China & Russia have made it clear that an attack on Iran by Israel will be deemed an attack by the U.S., meaning untold havoc could be unleashed on our war-weary, grossly outnumbered, dispersed forces, fighting frontline foes equipped not just with modern weapons but the nightmare gear only ETs/EDs can provide, what the ETs/EDs call “science fiction weapons.” Time and again the ETs/EDs have said: “Don’t provoke Russia; don’t mess with China.” The single best move the U.S. has, if Israel attacks, is to promptly join with Russia and China to defeat it, according to the ETs/EDs. At a stroke, the “global bully” backing “the regional bully” would be redeemed in the eyes of the world. Feasibility? Unknown!

The ETs/EDs, should Israel be so foolish as to attack, have numerous options at their disposal, some bloodless, but the ETs/EDs’ feeling is that Netanyahu needs an object lesson–in pain. Whether that comes personally to him and his party or is applied more broadly to his expeditionary forces, him and his cronies depends on whether or not he backs down, per the ETs/EDs. If he doesn’t, it’s going to be ugly. Not only will Israel face highly motivated terrestrial foes, but automatically wins the “death from above” sweepstakes ticket from the ETs/EDs, whose approach is simple: “Attack and you die!”

15 Responses to “War Is Forbidden In The Solar System”