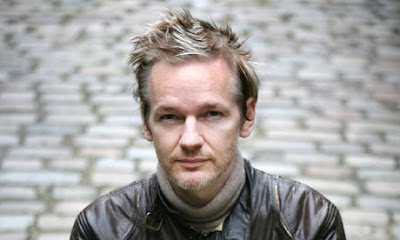 The media is being used to destroy his chances of a fair trial. Julian Assange.

War by media, says current military doctrine, is as important as the battlefield. This is because the real enemy is the public at home, whose manipulation and deception are essential for starting an unpopular colonial war.

Like the invasions of Afghanistan and Iraq, attacks on Iran and Syria require a steady drip-effect on readers’ and viewers’ consciousness. This is the essence of a propaganda that rarely speaks its name.

To the chagrin of many in authority and the media, WikiLeaks has torn down the façade behind which rapacious western power and journalism collude. This was an enduring taboo; the BBC could claim impartiality and expect people to believe it. Today, war by media is increasingly understood by the public, as is the trial by media of WikiLeaks’ founder, and editor Julian Assange.

Assange will soon know if the Supreme Court in London is to allow his appeal against extradition to Sweden, where he faces allegations of sexual misconduct most of which were dismissed by a senior prosecutor in Stockholm and do not constitute a crime in Britain.

On bail for 16 months, tagged and effectively under house arrest, he has been charged with nothing. His “crime” has been an epic form of investigative journalism: revealing to millions of people the lies and machinations of their politicians and officials and the barbarism of criminal war conducted in their name. For this, as the American historian William Blum points out, “dozens of members of the American media and public officials have called for [his] execution or assassination”. If he is passed from Sweden to the US, an orange jump suit, shackles and a fabricated unconstitutional indictment await him. And there go all who dare challenge rogue America.

In Britain, Assange’s trial by media has been a campaign of character assassination, often cowardly and inhuman, reeking of jealousy of the courageous outsider, while books of perfidious hearsay have been published, movie deals struck and media careers launched or resuscitated on the assumption that he is too poor to sue.

In Sweden, this trial by media has become, according to one observer there, “a full-on mobbing campaign with the victim denied a voice”. For more than 18 months, the salacious Expressen, Sweden’s equivalent of the Sun, has been fed the ingredients of a smear by Stockholm police.

Expressen is the megaphone of the Swedish right, including the Conservative Party which dominates the governing coalition. Its latest “scoop” is an unsubstantiated story about “the great WikiLeaks war against Sweden”. On 6 March, Expressen claimed, with no evidence, that WikiLeaks was running a conspiracy against Sweden and its foreign minister Carl Bildt.

The pique is understandable. In a 2009 US embassy cable obtained by WikiLeaks, the Swedish elite’s vaunted reputation for neutrality is exposed as sham. (Cable title: “Sweden puts neutrality in the Dustbin of History.”) Another US diplomatic cable reveals that “the extent of [Sweden’s military and intelligence] co-operation [with Nato] is not widely known” and unless kept secret “would open up the government to domestic criticism”.

Swedish foreign policy is largely controlled by Bildt, whose obeisance to the US goes back to his defence of the Vietnam war and includes his leading role in George W. Bush’s Committee for the Liberation of Iraq. He retains close ties to Republican Party extreme right figures such as the disgraced Bush spin doctor, Karl Rove. It is known that his government has “informally” discussed Assange’s onward extradition to Washington, which has made its position clear. A secret Pentagon document describes US intelligence plans to destroy WikiLeaks’ “centre of gravity” with “threats of exposure [and] criminal prosecution”.

In much of the Swedish media, proper journalistic scepticism about the allegations against Assange is overwhelmed by a defensive jingoism, as if the nation’s honour is defiled by revelations about dodgy coppers and politicians, a universal breed.

On Swedish Public TV “experts” debate not the country’s deepening militarist state, and its service to Nato and Washington, but the state of Assange’s mind and his “paranoia”. A headline in Tuesday’s Aftonbladet declared: “Assange’s moral collapse”. The article by Dan Josefsson suggests Bradley Manning, WikiLeaks’ alleged source, may not be sane and attacks Assange for not protecting Manning from himself. That the source was anonymous and no connection has been demonstrated between Assange and Manning and that Aftonbladet, WikiLeaks’ Swedish partner, had published the same leaks undeterred, was not mentioned – censorship by omission.

Ironically, this circus has performed under cover of some of the world’s most enlightened laws protecting journalists, which attracted Assange to Sweden in 2010 to establish a base for WikiLeaks.

Should his extradition be allowed, and with Damocles swords of malice and a vengeful Washington hanging over his head, who will protect him and provide the justice to which we all have a right?