When I first heard this Phil Schneider video a year ago, I didn’t believe it. Mach 2 trains that float above a single rail, that connect up hundreds of underground military bases across the USA. There are over one thousand such bases worldwide.

He has pieces of special titanium alloy discovered from crashed alien craft than can’t break and can tolerate incredible temperatures. He says charged particle beam weapons are normal but can’t penetrate such material. Spy satellites can see a dime on your kitchen floor. His revelations of extraordinary technology and events are endless.

There are nine underground military bases – 4.25 cubic miles underground – at Area 51 alone. They melt the rock to a powder. The public get the old hat technology from the military.

Two weeks before talking he was shot in the shoulder for talking publicly. Later on, he was rubbed out. Here he tells us what he wanted to tell us before he died. He wasn’t a politician, but he tried. His words –

‘We are serfs. The government is kings and queens. We are ruled by a technocracy. If we are complacent, and don’t speak out in droves, loving our country more than we love our lives. I was nearly killed two weeks ago. I was saved by a retired FBI man who risked bis career, his life to save me.

In working in Black Projects I was very loyal. I was strong mentally. I was good under pressure. I was building a biological laboratory at Los Alamos as part of a 3 cubic mile underground facility. We were building tunnel like holes 2.5 miles under the surface at 2 miles a day. The equipment kept coming up broken. I went down to find out what was causing it. I went down and saw green berets and black berets around the scientists. There was a greys camp down there, which had been there 500 years, smoke and smell. The government knew it was there but didn’t tell anybody.

A 7 foot tall alien grey smelt worse than the worst garbage can. Late August 1979. I reached for my pistol and tried to pop a clip in it. I killed two of them. However, in the process……(end of second clip)

An alien rubbed his chest, and I was hit by a blue flash which burned my fingers off my hand, burned my shoes. A green beret shoved me back in the basket and lifted me up. He lost his life. 66 crack troops lost their lives there. The US government didn’t even tell us there was an alien threat. There’s been a constant war with the small grey, large greys and the reptilians going on for years. The benevolent aliens have been helping us – the Pleiadasians, but they left because of being under constant attack.

One of them worked at The Pentagon for fifty eight years from 1937/8 onwards. He hasn’t aged one day since. He’s probably under duress. He says his life span is 498 years. He has six fingers and six toes. Giant heart. Copper oxide blood. His IQ is off the scale 1200. Speaks 100 languages fluently, alien and earth. He doesn’t shake hands. Aliens carry diseases which are deadly to us. Viruses like ebola or AIDS could have been developed from alien corpses.

There were alien aircraft at Bikini Atoll when the USA was detonating nuclear tests in 1946. The US Senate was lied to when the miitary told them that Roswell was the first contact with aliens. The US military knew all about flying discs as early as 1932 as did the NAZIs in WW2.

Impregnible metals have been made which can withstand particle beam weapons.’

Rest of clip is muted.

Clip 4 is missing. There are six in total.

‘Alien takeover is a serious threat. That’s what One World Government is. The only thing used to destroy the World Trade Center on 911, was a construction nuclear weapon housed at Mather AFB at Oklahoma City. We are being lied to by government officials. They should be jailed and arrested. He covers WACO, the pouring of deadly Caesium gas onto kids to ensure they died.

Martial Laws going to hit this country, the way things are going. I have an ex-wife and child. Defence agency goons tried to kidnap my daughter recently. My ex-wife pulled a gun and said she’d shoot if they didn’t give the daughter back. They gave the kid back.

I shot a Federal Agent dead sixteen days ago. He had just shot me. I defended myself to the best of my ability. It’s sad you have to do things like that. You are never the same as a person who has not killed a human being, whether it’s self defence or what. My message will continue. I’m doing it on my own money. I’ve got cancer. I’m dying. The stuff I was hit with in 1979 was radioactive. There’s no cure.

TAP – have we been taken over by an alien race? Who else would orchestrate the mass poisoning of the planet from the air with chemtrails? How are our own governments reduced into silence while they kill us, our plants and animals? Schneider was telling us the future. It was too late for him. Is it too late for the rest of us? How do we fight back? 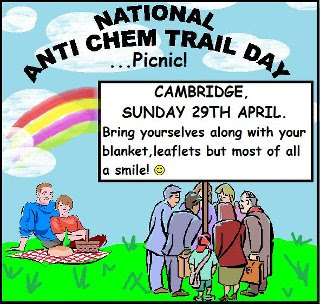 Here’s one idea in the UK.

8 Responses to “Technology So Advanced We Can’t Imagine It”