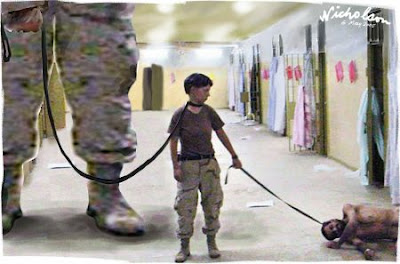 Lynndie England, the notorious Abu Ghraib torturer. Who pulled the strings higher up?

When I contacted Genesis Communications Network on January 1st of 2012, I divulged the following pieces of information to Alex Jones Program Director John.

I was shocked that GCN and Infowars were not interested in any of it.

However, I was even more shocked on how the government came down on me so harsh and severely. My initial guess to the governments overwhelming response was due to the photos they thought I had access to. It explains the questions I received from a guy in my unit concerning computer code experience and any programming skills I may have possessed. However, the ongoing blatant and outright censorship of this story does not make any sense?

Why? What are they still worried about?

They know I do not possess any photos. I would have already turned them in if I did after being subjected to this nightmare.

Is it the Gay Commander? He certainly doesn’t represent all gays in the military. While it doesn’t look good for the new Obama “Ask and Tell policy”, its not the end of the world for the movement. There are bad apples in every bunch.

Is it the NCOIC who was on the California Sex Offender Site? While embarrassing as that might be, clerical mistakes happen all the time. Especially in the military.

That leaves two options. One, they want to keep it quiet how I was personally treated throughout this whole event, and two, a ‘certain individual’ just wrapping up a book tour.

TAP – Is that Rumsfeld?

How I was treated can be easily dismissed by simply denying the whole event even occurred and that I was crazy. After all, I did call 911 myself and asked to be placed in the mental ward!

That doesn’t look good on my part but I assure you when you’re on the receiving end of a psychological warfare attack, the mental ward seems like relief.

Nonetheless, denying the event seems to be working just fine, so I ask you, why the constant and blatant censorship of my story?

It leads me back to a certain individual who just got done finishing up a book tour. Donald Rumsfeld has claimed to not know a lot of things that went on and says he was out of the loop concerning the torture that went on.

The way it usually works is CIA tells CID who tells Private Joe Snuffy to give Haji a hard time prior to his interview the next day. From my understanding thats how it works but the pictures indicate a complete systematic failure on all levels.

However for Donald Rumsfeld to claim he was unaware of the whereabouts of his star whistleblower prior to exposing his name on national televison is inexcusable. That level of incompetence is simply too hard for me to swallow. Could it suggest something far more sinister?

TAP – If he even knew the name of the whistleblower, he knew about the torture situation OK.

As an aside to this tale, The Tap Blog published Gregory’s story on February 11th 2012. Until that moment we were getting about 20,000 downloads a day on beforeitsnews. As of February 12th our B4IN account went to zero, and has since got back up to about 1000 downloads a day. Someone from on high decided they didn’t want any more of this getting out. OK we lost a good channel, but I’m still pleased we published this story. It’s important that Gregory PItchford’s can get their stories out somewhere – or Gordon Logan’s, and others being bullied and tortured to obtain their silence.

Does Alex Jones come out of this with credit? I am not sure. He claims he’s risking his neck to get stories out to his listeners. This is one he chose to avoid.