I’ve studied the evidence that Paul McCartney died in 1966 and was replaced with a double.

My apologies to Wasp.

It is totally convincing. How come he grew three inches aged 24? His eyes changed colour. His head changed shape. The Beatles never performed live again. The before and after pictures are the proof. You have to spend about an hour looking at them for this to sink in.

Paul was returning from his trip in good spirits, planning to arrive at Ringo’s house that night with two girls.
It had been a wonderful time.
After a period of turmoil, everything seemed to be returning back to a normal routine.

The storm in the world against the Beatles, instigated by John’s notorious comments to the press and stirred by further controversy over the “butcher” album cover, seemed to have finally calmed.
Paul had recently had a sudden burst of extraordinary creativity over a very short period of time, perhaps as a reaction to all that had happened. 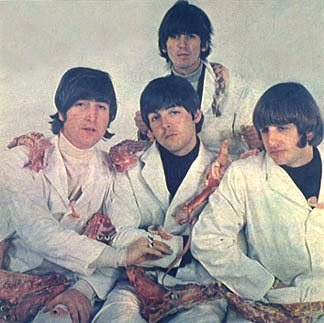 One of the last official photos of “THE BEATLES”

It had been a typically seasonal rainy day.
At a semaphore crossing a van suddenly cut across the street, blocking the car Paul was in.
The car didn’t quite stop in time and hit the van, but not seriously enough to do any real damage.

During the crash Paul lost his top-wig.

Paul telephoned Ringo to tell him what had happened and that he would be with him in an hour or two.

Ringo thought it was just one of those jokes that Paul usually pulled.
Soon after the telephone call the police arrived and Paul decided to get a taxi home.

The next morning, seeing that Paul had not returned home, Ringo tried to call him but strangely he couldn’t get in touch with him.

We retraced his steps through our common friends but nobody had seen or heard from him.
We were on the telephone all day.

On Thursday of the same week, a friend of Ringo called to say that people he knew had seen Paul in France.

We flew to Paris but Paul was no longer in the place where he was seen before.
As more days passed, our apprehension grew.

The hill: the place where Paul was found
(a frame from the “Magical Mystery Tour” Film)

A call was received from a girl, that days before, had found Paul near her house, wandering along a hill in a confused state with a damaged leg but without documents and money.

Brian Epstein went to retrieve Paul and on Sunday they started their trip to return home.
But from that day we heard no more news about them for days.

It was very early in the Wednesday morning of the week after we received the call, but not the one we had been waiting for.
We were called out to identify Paul’s body, found on a beach near Outreau, North France.

With his feet just below his knees as a result of a fall from a great altitude.

He was in a ghastly state.
His lips looked as if they had been heavily damaged.
The left side of his face had been ripped to pieces and the whole of his right ear had been bitten off.

When we arrived there was a line of police officers blocking us while a crowd of men in medical uniforms were retrieving material for further investigation.
They were so oblivious to the grief we felt that one of them had the audacity to exclaim right in front of Paul’s body: “Look …it seems like a walrus!”

Well, with his teeth hanging outside of his eaten-up lips and with a shiny swollen ear and dripping wet he really did look like a walrus.
John confronted the man who had spoken so insensitively and they began to brawl.
He had to be pulled away as he howled:

Brian was still in the plane when it went into the sea.

We were desperately aware that THE BEATLES were finished.
We were in total despair for two days.
But our anger made us think: we would not stop, we would not give up.

Paul had left a lot of material that was yet to be published.
We had a meeting, and agreed, nobody had to know what happened and Paul and Brian could still be kept alive.
The only question was how.

It was confirmed once again to the press that the Beatles wished to stop touring and work only in the recording studio to give us a bit of breathing space.

A friend of Ringo suggested a solution which could be made possible through the intelligence service department:
they had expert cosmetic surgeons and make-up artists at their disposal who could recreate perfect doubles in their secret labs…but in exchange for their help we had to keep quiet about what had happened.

The penalty for refusing to remain silent was death.
They found a look-alike for Brian, the S.O.E. agent Maurice Buckmaster, and they introduced us to a few contenders for Paul but the main problem was to find one with the most similar voice possible.

We had already checked out a number of imitators, of which there were many at the time, in order to find one with a face compatible with Paul’s.

There was a boy already working with us that was able to imitate Paul’s voice in a cogent manner and his face as presented was wonderfully compatible in regards to his profile elements displacement and to jawbone shape, two key factors in determining the correct candidate that the cosmetic surgeons could use.

See ‘The British Invasion Of America‘.