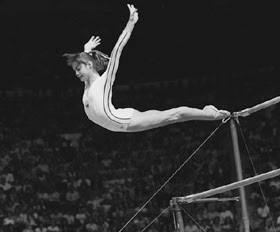 Nadia Comaneci aged 14 in 1976 at the Olympics. She’s shocked by the treatment of the British Team by British Gymnastics

There is something very fishy going on with the British Rhythmic Gymnastic Team failing to get to the Olympics.

First off, as the host country, we have a right to a place automatically.

But in order to avoid GB entering an embarrassingly bad team, a benchmark standard was agreed for the Team to meet.

The local paper in Bath, where they train, reported that they failed to achieve the target by some minuscule 0.273 of a point:

You would think that since the qualifying mark is unofficial, they could just let them through anyway, since they were so close. But not to worry, because at the final of the same event, the Team did score enough points to qualify for the Olympics, as reported by the Telegraph:

So all is well? 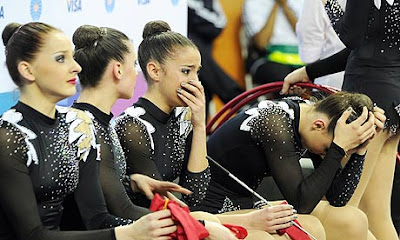 No, the sport governing body, British Gymnastics, are now saying that the points in the final don’t count, even though there is nothing in the original agreement that says so.

The Team and the people around them are challenging the decision through the Courts, despite being sent a warning letter by British Gymnastics telling them to give up now and not put the girls through any further distress!

Seems like some force inside British Gymnastics is trying to block the path of their own very talented Rhythmic Gymnastic team. Very very fishy.

Gold medal winner, Nadia Comaneci has put her name behind the appeal, and the British Team have no intention of giving up their fight.

Comaneci, the 1976 and 1980 Olympian, said the host nation should have a rhythmic gymnastic presence at the Olympics to inspire the next generation of young women.
“It is important,” said Comaneci, noting that this was a rare opportunity for the sport to promote rhythmic gymnastics at the highest competitive level.