The website John Kettler Investigates is making waves in security circles. Or so he claims. 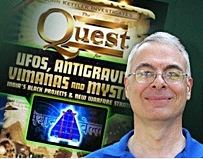 In a long (but essential) Project Camelot interview with Kerry Cassidy, John Kettler seems to be either mad or brilliant, but extremely well informed. He explains how Iranians supplied forty North Korean nuclear armed missiles to Venezuela, and their use was threatened as part of a deal to protect Iran. That’s all interesting stuff – a new missile crisis for the USA, with Hugo Chavez in control.

Then Kettler gets even more interesting. He claims the NWO are trying hard to get WW3 started, but extra terrestrials are operating to frustrate them. The ETs assisted the drug cartels in league with NWO to locate the forty missiles and take them out, which they did with a vast explosion.

You have to say this makes interesting reading, although it would be nice to see a bit more evidence. Here’s a post from his blog which has similarly extrardinary stories.

ETs/EDs’ (extraterrestrials/extradimensionals) warnings made earlier here have been proven fatally correct. Ultra reliable information indicates some five plus CIA officials, ranking as high as the Deputy Director level, have apparently committed suicide en bloc by hanging themselves with their own silk ties.

Some did it in their office cubes, while others were found dangling “where the trees talk to you” on the approach to the CIA’s main entrance. The “talking trees,” wired with both mikes and speakers, allow unseen guards to challenge visitors and receive their responses–while watching visitors on security cameras. What the ETs/EDs said would occur has now occurred. Again!

The earlier blow made by ETs/EDs against Israel’s efficient CIA equivalent, Mossad, targeted the little-known Kidon (“bayonet” in Hebrew), Mossad’s elite assassination unit. No additional details available. Nor did Israel heed the emphatic warning from the ETs/EDs regarding sailing her ex-French nuclear powered ballistic missile submarine (SSBN), now wending slowly toward Iran via the long route. No way would Egypt have let it pass through the Suez Canal! The ETs/EDs know this, and said: “That boat is forfeit. It will simply vanish, never to be seen again.” Israel did not listen to the ETs/EDs and will suffer accordingly.

The notoriously leaky CIA has reportedly created, and the DCI (Director of Central Intelligence) has recommended to other agencies, a new alert state indicator called the KC Level, short for Kettler Condition Level. The scale runs from one to ten–in Roman numerals, but this post, which shows the ETS/EDs’ predictions were spot on, is likely to force the users to go higher than that! The ETs/EDs are about to wreak wholesale havoc.

The KC Level depends on: the sensitivity of the information (information on ETs/EDs off the charts) in the latest post, the hazard said information poses and what has happened to confirm that and/or earlier posts. The KC Level now joins the more familiar Homeland Security Terrorism Threat Level and the scarier DEFCON (Defense (Alert) Condition; runs from 1-5, with 5 being the lowest and 1 being all-out thermonuclear war). What “that Kettler fellow” says in this blog has become the single most discussed topic in spook circles, be the topic ETs/EDs or other ID (instant diarrhea)-inducing matters.

This tiny blog, with a handful of visitors (best day 76), but hordes of spooks who invisibly visit, read about ETs/EDs plus other sensitive stuff (please buy the writer’s E-book while you are here; on Home page), is having a gigantic impact, shaking the Intelligence Community and others to their very foundations, one literally through the ETs/EDs’ actions! This blog has triggered a government wide security clampdown and a witch hunt for the leak source/s, plus a chiding memo from one agency head to another as to whose “shop” has leaks.

Clearly, the spook community is paying exacting attention to everything said here on warnings from ETs/EDs, ETs/EDs’ announcements, ETs/EDs’ comments and ETs/EDs-related technology matters and is freaked over all this material on ETs/EDs getting out. This conclusively proves a) the U.S. government has knowingly lied for decades about the existence of UFOs, ETs/EDs, aliens, Visitors; b) all topics on /about ETs/EDs are National Security matters of the highest import and c) posts some think madness are precisely on target, hence, the extreme reaction.

The Agency (common name for the CIA) reportedly photocopied all this blog’s copyrighted posts and sent individual post collections (some 24,000 and accompanied by a survey) full of material on ETs/EDs to everyone at Langley. Hilariously, some got redacted versions, not being cleared for the information! Anyone with a redacted copy has but to come here to see what got redacted, be it on ETs/EDs or something else. To limit classified gossip, on ETs/EDs and other hot topics, no more than two at a time are allowed near the water cooler.

The Pentagon has not gone to such publishing extremes, but each post is copied and passed around by various individuals to people it affects/would find it of interest. This blog is also read avidly at the DIA (Defense Intelligence Agency) and NSA (National Security Agency), to name but a few.

Since the ETs/EDs’ predictions have now been repeatly proven dead on, the ETs/EDs’ “street cred” must now be taken as astronomic. Senior spook officials have seen the ETs/EDs’ “handwriting on the wall,” could not stand it, and either offed themselves or were “suicided.” More bodies will continue to drop; it is a mathematical certainty. In turn, the disappearances the ETs/EDs promised, if not already begun, come next. And they will not be subtle, either. People will simply vanish on the spot. The people who do not read this blog may get excited, mistakenly believing the Rapture is happening.

The ETs/EDs are determined to extirpate the NWO (New World Order), but will ensure the innocent are not harmed. In parallel/after, those disappearances will be spectacles no government can explain. Using the general form here is deliberate. Russia, China, the United Kingdom, Israel and other countries are already suffering/will suffer the same fate. The ETs/EDs have declared war on the NWO, and the ETs/EDs’ actions so far mere pinpricks! Critical targets and nodes will be hit first, but the entire NWO will be savaged–until it is no more and Earth and her people are free.

TAP – John claims he has inside information from ground sources, but he is also talking to off-planet sources, who are chanelling their information via him. This is more of the same notion as stated in Kerry Cassidy’s

Is he a fantasist or is he for real?

People need to know what’s going on, he says.

He’s in touch with two alien groups, which are human(oid), who are intent on stopping the reptilian war agenda, and stopping the greys, as a matter of overriding priority. This is his second interview. I wonder what he said in his first interview.

The ETs have a limited number of operatives. One group is simply locked up trying to stop Israel from starting WW3. There is another force engaged in radioactive clean-up from Fukushima. There are so many bad situations that they are overstretched, and concerned at the interventions of non-benign alien groups such as the Reptilians.

There are concerns about tectonic activity is western USA, and the creation of 100 million body bags readied to cope with massive earthquake, which the Reptilians are trying to deliberately trigger. It sounds like Spiderman battling with Superman! They are trying to stop the world from falling apart physically, to stop the explosion of nuclear reactors, to stop the war that many nations are desperate to start as soon as possible. It’s a lot to be taking on. The situation is incredibly dire.

His description of battles in the Persian Gulf fending off Iranian attack boats are extraordinary. The off-planet contingent decided they wanted to protect the tankers, and they are defending the tankers. An Iranian sub was being tracked, and it simply disappeared, as did an Israeli vessel. These things were seen by the media, but gagged. Forty Iranian boats simply disappeared as they were attacking tankers in the last week. The off planet team are doing amazing things every week. Ground sources confirm these reports.

CHEMTRAILS – Very heavy levels of chemtrailing are being reported. They are panicking and are trying to rush their plan to completion to the point where they can’t be reversed. They want to create an environment which is fundamentally hostile to human life, but suitable for reptilians and greys.

They are trying to poison the atmosphere for life, and create a paradise for themselves. It’s on the list to do, but first they are dealing with is nuclear contamination and stopping the wars, and they only have so many resources.

1 hour 57 minutes. Q. Why don’t they shoot down chemtrailing planes?
A. They might well do that. But they try to avoid taking human life.
TAP – I do wish they would. We’re all fed up with coughing our guts out up here. The amounts being dumped are rising every week. Shoot them down before they kill us all. Just one down might be enough to stop the others, or five. Please.

2 hours 7 minutes – he mentions the 5 CIA officials hanging from the trees outside their offices. If they can do it to CIA, why can’t they do something to chemtrail command?

2 hours 16 minutes many of the wars in the middle east are to control the stargates, where aliens come and go – Iraq, Iran, Yemen.

2 hours 17 minutes talking about the Pyramids that can direct energy outwards, mentioning the one in Serbia.

2 hours 19 minutes talking of earth being converted to a higher plane, not related to stargates. if you control the stargates, other groups cannot come and go.

2 hours 22 minutes Christchurch NZ punished with earthquakes for preventing TPTW from building themselves refuges there.

2 hours 23 minutes there are three different alien groups working on the banking situation, which is why there are so many resignations going on.

2 hours 26 minutes they are cutting out a cancer. this is a war. there are casualties. humans cannot do this for themselves. people don’t have the information, the wherewithall. other planets were helped. they in turn are helping us now. showering flowers on the reptoids isn’t going to shift them off the planet. there are demons. pay attention to your intuition.

I’ll note this one tomorrow. Goodnight.

Hugo Chavez Venezuelan President speaks to his nation at:

Well worth watching if you do not mind reading English subtitles…