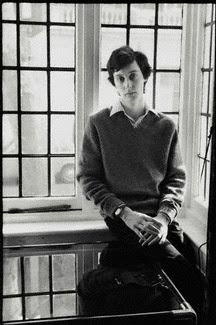 The Rothschild They Murdered

Apparently, the Illuminati are not immune to lethal attack, when they administer it themselves.

He was the only son of Victor Rothschild’s second marriage, and after his older half-brother Jacob, heir to the Rothschild dynasty. (“Mayor” was his mother’s surname.)

Amschel’s obituary stated: “Where his father was of large and pugnacious build, Amschel Rothschild was tall, thin and strikingly graceful [after his mother]. His bushy head of hair … emphasized large, sad brown eyes. He was precise, almost obsessively tidy, enjoyed making difficult cocktails and revisiting old jokes. He loved his farm, his children, restoring old outhouses, extending his lawns, going to bed early.”

As a teenager he raced motorcycles and later vintage cars and bi-planes. “He started racing classic cars in 1974, owning successively a Lotus 10, an AC Cobra, a famous 1954 250F Maserati, a 1964 Willment Daytona Coupe in which he won two Historic Sports Car Championships…”

He married brewing heiress Anita Guinness in 1981 and had three children, Kate (b.1982); Alice (b.1983) and James (b.1985). He farmed during his twenties and didn’t join the family business until 1987. He served an apprenticeship before being appointed executive chairman of Rothschild Asset management in 1993. His obit continues:

“Amschel was regularly billed as the heir presumptive to Sir Evelyn de Rothschild for the chairmanship (Sir Evelyn’s children being still too young to be candidates), though newspaper reports would be sniffy about his prospects; they implied his profile was too low, that with his gentle manner, he was too “nice”, that he lacked the killer instinct.”

On July 8 1996 he was found dead in the bathroom of his suite at the Bristol Hotel in Paris. According to the official story, he had committed suicide by hanging himself with the belt of his bathrobe. Thanks to the now defunct “The Spotlight” we have the truth:

Exclusive To *The Spotlight*
August 5, 1996
By Sasha Rakoczy

French police have determined that Amschel Rothschild, heir to
the fabulous Rothschild banking fortune, was murdered, according
to well-placed European sources.

But, French Prime Minister Jacques Chirac has ordered police to
close their investigation. Media outlets worldwide have ignored
these mysterious developments. Some have reported the death was
a suicide, other outlets disregarded the death altogether.

As if obeying an invisible choir-master, the world’s competing
news organizations silenced their strident sensationalism this
month to cover up the mysterious death.

In the United States, newspapers controlled by Rupert Murdoch,
the foreign-born owner of the world’s largest media empire,
either studiously ignored reports that Rothschild had met a
violent end, or relegated it to the back pages as a mere “heart
attack.”

A *Spotlight* inquiry has established that Rothschild, 41, a
billionaire investment banker and a noted sportsman in excellent
health, was discovered lifeless on the floor of the bathroom of
his suite at the luxurious Bristol Hotel in Paris on July 8 at
7:32 pm.

Police found that he had been strangled with the heavy cord of
his own bathrobe. One end of the cord was attached to a towel
rack, as if to suggest that Rothschild’s violent death was
self-inflicted.

“The [French] crime scene investigators never called it
‘suicide,'” reporter Theirry de Segonzac told *The Spotlight* in
a telephone interview from Paris. “After photographing the body,
one of the detectives gave the towel rack tied to the body a
strong tug. It came right out of the wall.”

Had Rothschild really attempted to hang himself from that rack,
he would have ended up with nothing worse than a couple of holes
in the wall, de Segonzac said.

There was no suicide note, no discernible cause or reason for a
finding of suicide, knowledgeable sources say. Rothschild, an
athletic and imperious figure in early middle age, was a renowned
race car driver and the husband of Anita Guinness, herself one of
the world’s wealthiest heiresses. The couple had three children
who spent most of their time on the family’s baronial estate in
Suffolk, England.

Rothschild had arrived in Paris to take over one of the many
family consortium’s French assets — management operations which
were to be merged with N.M. Rothschild’s London-based investment
banking center.

“Far from being ‘troubled,’ Amschel Rothschild’s star was on the
rise and he relished his success,” says an executive at Keefe,
Bruyetter and Co., a respected Wall Street monitor of the
financial services industry. “I don’t believe for a moment he
suddenly went and killed himself. There’s much more to this
story.”

But with frantic speed — within an hour after the body’s
discovery — authorities and news executives in both France and
Britain launched an unusual joint offensive to preempt a public
inquiry or a press investigation into the circumstances of
Rothschild’s death.

“Murdoch sent a hotline fax to his 600-odd editors and news
managers around the world, ordering them to report Amschel’s
death as a heart attack, if at all,” said British broadcast
reporter Ian Gooding. “No one around here has ever seen such
pressure to kill a front-page story. But in the end, the
cover-up was complete.”

By the way this story was buried, it is obvious that Amschel was murdered.
Apparently the Illuminati are not immune to lethal attack, when they administer it themselves. If an enemy of the Rothschilds had done it, believe me you’d know.

The Rothschilds appear to have a secret compact. Each member of the dynasty will die if he refuses to advance the plan for the subversion and enslavement of the human race outlined in “The Protocols of Zion.”

Obviously Amschel Mayor James Rothschild did not have “the killer instinct.” We don’t know the details but he became an obstruction.

Amschel’s story is a great tragedy. A sensitive, intelligent and good man is born into a megalomaniacal family of generational satanists. He discovers he must be a ruthless predator. It’s not in his character. He has a soul. he resists and is murdered.