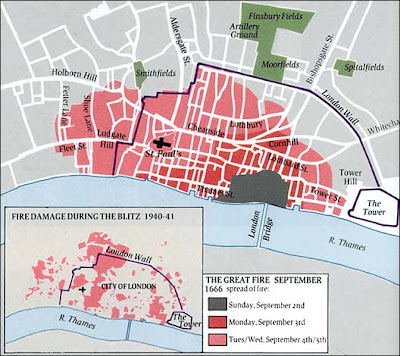 Was this fire nothing more than a huge smokescreen? If you have heard of the term “Strawman” and want to know where it originated or if you wondered why the City of London is so powerful. read here:-

Firstly I’d like to say sorry for the corny title, but I felt it was apt anyway.

I’ve been studying old legislation for a few years now and it never ceases to amaze me that I still learn something new each time I wander down that avenue. I was taught at school that London suffered from the PLAGUE in 1665 and that the Great Fire of London in 1666 burnt out the rat infestation and thus cured the spread of the disease they carried. I’m not so sure the accidental fire in Pudding Lane was an accident. This part of London Town was called “CHEAPSIDE”. This was a slum area, of no concern to anyone and was without any intrinsic value. It was the mother slum of all slums. An interesting conundrum of chronological dates might show there was a hidden agenda. A Comet made a pass over the Northern Hemisphere in 1664 and most people saw it as a bad omen, the end of the world. Could it be posible that so much negative thought then acted like an antenna and consciousness created the resulting Plague out of negative critical-mass thinking?….

Whatever happened, the Plague spread through England, especially in high density townships and cities like London. What happened next is most remarkable in its timing and we were taught that this Great Fire ended the Plague. It would appear the Plague was nearing the end of its course, and the following events became very CON-venient

Here is my latest finding:-

That’s French to English Translation….now look it up in Blacks Law Dictionary and see what it really means in legalese.

“The person whose life measures the duration of a trust, gift, estate or insurance contract”.

The fact that this English Law was disguised within a French term might give credence to under-hand agendas being present, but when the translation to English does not match the Legalese translation, it proves beyond any doubt that another agenda was in play, or has since become a very conveneient re-play with new terms being applicable.

This Act is still being used to this day.

We all know Prime Minister Harold Holt went for a swim and never returned. Trouble is, we had to wait 7 years before he was claimed DEAD, and not merely missing in action. WHY?

Because of the above named act “CESTUI QUE VIE ACT 1666” which can be read here:-

I now find a new CESTUI QUI VIE ACT 1707, which I have not had time to scrutinise.

This act was so important because it KILLED EVERYONE…and gave them 7 years to claim back their lives.

(The inception of the STRAWMAN also robbed people of their properties for the same reason).

More important than anything else, it cleared approx one square mile of old buildings, so that new ones could be established. HELLO….CITY OF LONDON…..Yup…out of the ashes of the innocent and decent hard working people came the CITY of SCUMBAGS who control the world today.

Anyone find this too coincidental….then look up on Google Maps and find Pudding Lane, then look for the Bank of England, (built after The Bank of England Act 1694), do your research on the beginings or creation of the City of London as we know it today which was built from the ashes of Cheapside in1666.

The Golden Square Mile contains among other things, The Bank of England, London Metal Exchange (LME), Fleet Street (News), F.T.S.E. (Stock Exchange), the Royal Mint and the Old Bailey (court)…are you getting the picture yet?

Lets go one step further…The City of London has its own flag, its own constitution & laws, its own defence force, its own police force, in fact its a sovereign nation right inside London itself. As a sovereign nation it is not amenable to any British legislation/rules/laws/flag for they are totally independent. Do the taxes earned from Fleet Street News rags, LME, FTSE go towards the British Govt. and the people?…..good question…..and it needs answering…you can take a guess, but that’s all it will be. Can someone please research this topic…I have too many other things to do, but I’d love to have something fully sourced. Whilst I have brought this era and matter to your attention I am not stating that these are all facts. The Cestui Qui Vie Act 1666 is fact. The physical City of London created in 1666 is fact, although the City of London Corporation was established much earlier. The buildings I mentioned…I just looked on Google Maps and if I’m a bit off the mark, so be it, for I do not purport to know London, let alone the City of London….

Oh yeah ….one more thing…The council members of the City of London….guess who they are….. again this is a guess-timate by me at the moment, but I have been told these councillors are the front men for the international banking families. This rings a bell in my mind, but pls do not blast me if this is un-proven….I’m looking for people to source this information and bring it to the table so we have nothing but facts in front of us.

This is a skirmish…all those who wish to resource this should start looking to see what you can bring to the table…lets see if lots of eyes can uncover the real facts, its certainly something to do on a rainy weekend, and its fun. There’s enough to work on…and enough dots to make a guess at the real picture so please bring something back to the table, and lets get this picture revealed in its full and true colours.

Remember… The City of London Corporation was not created in 1666, it was already well established, but it was never more powerful than it became after the Fire of London 1666, The Bill of Rights 1688, The Bank of England Act 1694 and the Act of Settlement 1700. This was the sole purpose of this thread, to show the Fire of London as a “smokescreen”